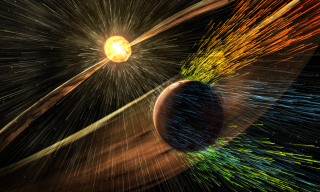 When it comes to understanding how terrestrial planets evolve around other stars, Mars may provide a good stand-in. Early Mars once boasted an atmosphere and even oceans, but as the active sun evolved, it began to strip the Red Planet of its air, a process that has also been spotted in action outside the solar system. NASA's MAVEN mission, currently orbiting Mars, may help scientists to understand the atmosphere of other rocky worlds undergoing that process.

"We're at the brink of starting to understand the habitability of terrestrial planets," said Shannon Curry, a research scientist at the University of California, Berkeley. Part of the MAVEN team, Curry spoke at the 228th American Astronomical Society meeting in San Diego in June about the spacecraft's observations of the Martian atmosphere.

"Mars right now is our ground truth for planets of this size," Curry said. [Mars Atmosphere Being Stripped By Solar Wind (Video)]

Early Mars was warm and wet, with flowing rivers and enormous oceans. But the planet is smaller than Earth, and too small to hold onto its protective atmosphere. Over time, the low gravity, combined with radiation from the sun, stripped away the air on Mars, removing liquid water from the surface and leaving behind the dead red world seen today.

MAVEN can help peer into the planet's past by examining how much atmosphere it's losing today. The satellite launched in 2013 and entered orbit around Mars within a year, where it began measuring what's happening in the planet's air. The probe observed how solar flares, radiation and large bursts known as coronal mass ejections (CMEs) affect the planet's atmosphere.

"The solar environment we're talking about is specific to our sun today, but all of these are physical processes that occur on planetary bodies throughout the universe," Curry said.

By understanding how the sun's activity today affects the Martian atmosphere, scientists can better estimate how well exoplanets can hold onto their own.

Of course, such observations require a little help from the sun — help which has been rather lacking recently. According to Curry, this is one of the quietest solar cycles in the last century, much quieter than what MAVEN scientists hoped to see.

Flares especially have been few and far between. While discussing flare-related loss, Curry said, "We've been getting nothing because of the stupid solar cycle.

"We're really wishing for big storms at Mars and haven't really gotten any of them," she added.

Blowing out the atmosphere

The low solar activity doesn't mean MAVEN hasn't gathered any information. The spacecraft has still been able to observe the shape of the atmosphere as it stretches behind the planet. The tear-drop-shaped atmosphere is similar to how a comet sheds material, but not identical: In addition to a trailing tail that stretches more than twice the width of the planet, Mars also spouts plumes from its poles.

"It's not simply a stream behind the planet," Curry said. "It's actually crafting these different plume features."

By probing the atmosphere in far- and mid-ultraviolet, MAVEN created maps of escaping carbon, hydrogen and oxygen, all of which flee the atmosphere at different rates. Curry said the water in the upper atmosphere is contributing to the escaping hydrogen.

Mars isn't the only planet known to have an escaping atmosphere. For another example, Curry pointed to GJ 436b, a Neptune-size world with a comet-like trail of escaping hydrogen behind it. The planet isn't close enough to its star to completely lose its atmosphere, but with a tail stretching 9 million miles (14 million kilometers) behind it, the exoplanet could provide a clue into how rocky super-Earths form. Understanding how the sun helps strip the Martian atmosphere could provide further insight into the process.

MAVEN's measurements have allowed scientists to determine that, if the sun were as quiet through its history as it is now, the Red Planet would have lost about 63,000 gigagtons of atmosphere, a number that corresponds to a surface layer of water 15 feet (4.5 meters) deep. The quiet solar cycle leads to a deceptively small atmosphere, but it provides a floor for estimations. [How NASA's MAVEN Mars Orbiter Works (Infographic)]

"MAVEN's observations during a quiet solar cycle are incredibly helpful as they place a lower limit on the atmospheric escape," Collins told Space.com. "Our measurements now serve as baseline numbers, in effect."

The sun hasn't been still through MAVEN's whole mission. In March 2015, an enormous CME caught the edge of the Red Planet, resulting in what Curry called "an explosion of plasma." MAVEN examined the real-time escape rates of the planet's atmosphere, including an uptick in the process known as sputtering.

Sputtering occurs when charged particles ejected from the sun fall into the atmosphere and collide with neutral particles (that have no charge). The collisions knock some of the neutral particles out of the planet's grasp, sending them hurtling through space. Curry said that although sputtering is the smallest escape process under current conditions, it is thought have had the strongest effect on destroying the Martian atmosphere when the sun was younger and more active.

When the sun is quiet, particles from the solar wind knock out a few atmospheric particles at a gradual pace. But explosions such as the March CME dramatically increase how much of the atmosphere blows off, as much as 10 to 20 times more than during quiet periods. Curry compared the difference to a child entering a pool or a ball pit.

"If you carefully step in, not much is going to come out," she said. "But if you get a running start from 100 feet away, all of the balls or water comes out of the pool."

Earlier in its lifetime, the sun was more active than it is today, so sputtering was probably a more important process for removing the atmosphere, Curry said. Understanding that process will help scientists figure out what they see on other worlds.

"Using Mars as a ground truth for understanding atmospheric escape from exoplanets will be really important, especially when we are able to observe the makeup and density of exoplanets and their atmospheres, or even magnetospheres someday," Curry said.

While Venus has a sweltering atmosphere and Earth a comfortable one, Mars' thin atmosphere makes it rather unique, as does its smaller mass. The Red Planet also released less gas from its surface in its early history, which Curry said would result in a very different atmospheric evolution. Combining observations from all those planets can help to understand the variety of worlds that exist beyond the solar system.

"We can take our specific wealth of knowledge about Mars' size, density, atmospheric composition and history, which we know about through imaging and rovers, to put together a timeline of when there was water and a thick atmosphere, and how those inventories were depleted," Curry said.