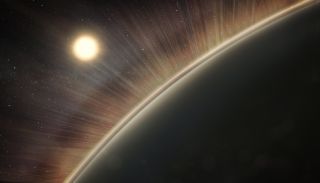 Venus' magnetic field is powerful enough to push oxygen up and out of its atmosphere, which helped to remove traces of ancient oceans. In this artist's concept, the rays represent the paths of oxygen and hydrogen ions pulled out into space.
(Image: © NASA/Goddard/Conceptual Image Lab, Krystofer Kim)

Venus has an "electric wind" strong enough to strip water's building blocks from the planet's atmosphere and fling them into space, new research suggests.

The process is described in a new NASA video.

Venus is known for its hellish temperatures, which average 860 degrees Fahrenheit (460 degrees Celsius) — more than hot enough to boil oceans on its surface and turn them into steam. Previous research suggested that early Venus may have had enough water for oceans on its surface, but today, there is little evidence of steam in its atmosphere. The steam must have escaped somehow. [What Would It Be Like to Live on Venus?]

That escape may have been facilitated by a breakup into hydrogen and oxygen, the building blocks of water, researchers propose in the new study. The hydrogen likely escaped into space — similar to what happened on Mars — and the oxygen reacted with rocks on the surface for billions of years, the researchers said. But the rest of the oxygen appears to have been lifted out of the atmosphere, to be carried away by the stream of charged particles flowing out from the sun, they said.

"It's amazing, shocking," Glyn Collinson, a scientist at NASA's Goddard Space Flight Center and lead author on the new work, said in a statement. "We never dreamt an electric wind could be so powerful that it can suck oxygen right out of an atmosphere into space. This is something that has to be on the checklist when we go looking for habitable planets around other stars."

The oxygen would have been pushed out of the atmosphere by Venus' electric field, Collinson said. On Venus, the electric field is so strong that the heavier, electrically charged oxygen ions are pushed out of the atmosphere along with the lighter hydrogen. Scientists are unsure why the field is so much stronger at Venus than at Earth, but the researchers suggested that perhaps it's because Venus is so much closer to the sun, where the ultraviolet sunlight is twice as bright.

"If you were unfortunate enough to be an oxygen ion in the upper atmosphere of Venus, then you have won a terrible, terrible lottery," Collinson said. "You and all your ion friends will be dragged off, kicking and screaming into space by an invisible hand, and nothing can save you."

This electric field was discovered using the electron spectrometer aboard Venus Express, a European Space Agency spacecraft that orbited Venus between 2006 and 2014. The team saw electrons leaving the upper atmosphere at far above expected speeds. By seeing the change in speed as Venus' electric field accelerated the electrons, they estimated that the field is at least five times more powerful than Earth's.

The research was published June 20 in the journal Geophysical Research Letters.