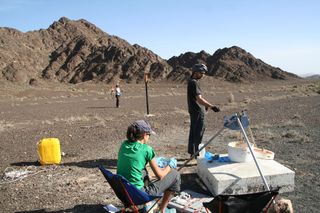 Methane gas on Mars may represent signs of past or present extraterrestrial life — or it could simply come from non-living geological processes. Scientists aim to solve that Martian mystery by studying methane-producing organisms living within remote wells in the Middle Eastern country of Oman.

The Omani wells go down hundreds of meters beneath the Earth's surface to reach rock layers that store underground water. Such environments, where rocks from our planet’s mantle are in contact with water, could provide clues about the possible past or present habitability of planets such as Mars, says Alexis Templeton, a geologist and microbiologist at the University of Colorado at Boulder. She and her colleagues discovered the existence of tiny microbes capable of making methane in water samples taken from the wells. Their finding marks a first step toward better understanding how methane is produced in such underground environments.

"We were excited to know that we definitely can detect methanogens — organisms that can make methane — and we can detect methane," says Templeton. "But we can’t make that causal link yet." [Amazing Mars Rover Curiosity's Latest Photos]

Nobody knew if any life actually existed deep within the wells. But in the winter of 2014, Templeton and her colleagues gained the Omani government's permission to collect water samples and drill cuttings from the well sites. They detailed their research results in the February 2016 online issue of the journal Geochimica et Cosmochimica Acta.

Few opportunities exist for studying such underground rocky environments where the rocks are rich in the minerals olivine and pyroxene. Such minerals are commonly found in both rocky planets and moons throughout the solar system. The interaction between water and such minerals can also lead to the formation of minerals such as serpentinite rock. But on Earth, researchers rarely get easy access to these underground rock layers.

Sometimes geological activity from the shifting of the Earth's tectonic plates can expose such rocks on the surface in places such as California, Turkey, and Oman. In other cases, researchers have looked to areas adjacent to the hydrothermal environments of underwater mid-ocean ridges, such as the Lost City Hydrothermal Field along the mid-Atlantic ridge. Sometimes water that has been trapped underground in such rocks can be observed in surface springs. However, the Omani wells provide a rare opportunity to access trapped rock and water and gas samples that have not been exposed to the Earth's atmosphere.

Several surprises have already come from the initial study of the well samples' rock chemistry and water mineralogy. In the first place, researchers found methane dissolved in the underground water that had an unusual "enigmatic" chemistry never seen elsewhere.

"[The subsurface methane] doesn’t match with the isotope chemistry of any other methanes measured before, and it doesn’t fit the model of how other methanes are made," Templeton says.

The team also used RNA sequencing to detect the DNA signatures of several organisms such as Methanobacterium, a microbe that creates methane, and Methylococcus, a microbe that breaks down methane to obtain the chemical energy and carbon necessary for survival.

Both microbes have adapted to live in relatively low-temperature environments that lack access to oxygen from the Earth's atmosphere. They must also survive a hyper-alkaline (basic) fluid environment with pH levels higher than 10, a level similar to cleaning detergent or ammonia.

Additional study could also reveal answers to whether or not the organisms are producing significant amounts of methane. Hannah Miller, a doctoral candidate in geology at the University of Colorado in Boulder and lead author in the recent study, plans to use her thesis project to study how the organisms may be producing and consuming methane.

"We get excited to find methane, but it's still very challenging to figure out how the methane formed," Templeton explains. "We’ll be doing future work to see if we can prove how and when methane formed and what that represents for biology and chemistry."

Such future work may rely on an effort called the International Continental Drilling Program. That global program could spur large-scale drilling in Oman starting sometime in 2017 and lasting for as long as three years. Instead of just collecting a few rock samples from drill cuttings, researchers would recover huge amounts of rock that could be studied in labs. But they must collect the rock samples in a way that maintains the fragile signs of life inside.

"We’re preparing to handle the rocks in a way that preserves past and current life activity," Templeton says.

This story was provided by Astrobiology Magazine, a web-based publication sponsored by the NASA astrobiology program. Follow Space.com @Spacedotcom, Facebook and Google.