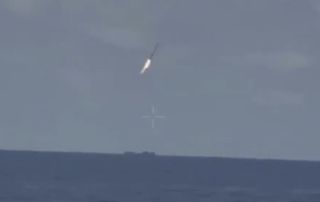 The first stage of SpaceX's Falcon 9 rocket tries to land on a robotic "drone ship" in the Atlantic Ocean on June 15, 2016. The attempt failed; the booster hit the ship's deck too hard.
(Image: © SpaceX)

A new video shows just how close SpaceX came to acing its fourth consecutive rocket landing at sea this week.

The first stage of SpaceX's Falcon 9 booster descended as planned on a robotic drone ship in the Atlantic Ocean during a satellite launch Wednesday (June 15), as the rocket-landing video shows. But something went wrong at the very end, and the Falcon 9 hit the ship too hard.

"Looks like early liquid-oxygen depletion caused engine shutdown just above the deck," SpaceX founder and CEO Elon Musk said via Twitter Thursday (June 16) in a post describing the video, which he also posted to the social networking site. [See photos from Wednesday's launch and landing attempt]

"Turns out the landing was not as fast [as] we thought, but still hard enough to destroy the primary airframe and accordion the engines," Musk added in another tweet.

The first stage separated about 2.5 minutes into flight and headed back to Earth for its appointment with the uncrewed ship, called "Of Course I Still Love You," while the rocket's second stage kept toting the satellites to GTO.

The touchdown failure was not too much of a surprise. Before Wednesday's launch, SpaceX representatives had stressed that sticking the landing would be tough, pointing out that GTO missions require rockets to travel very fast — and that the boosters therefore experience extreme temperatures and forces when they come back into Earth's atmosphere.

Still, SpaceX had succeeded in its previous two ocean landing attempts during satellite launches to GTO, on May 6 and May 27. A Falcon 9 also made a pinpoint landing on Of Course I Still Love You on April 8, during the launch of SpaceX's robotic Dragon cargo capsule toward the International Space Station (which lies in low Earth orbit — much closer than GTO).

So Wednesday's near miss ended a streak of three consecutive successful drone-ship landings. But Musk said he does not expect perfection at this stage.

"As mentioned at the beginning of the year, I'm expecting ~70% success rate on landings for the year. 2016 is the year of experimentation," he tweeted Thursday.

SpaceX eventually wants to land and refly the first stage of every rocket it launches. Doing so will cut the cost of spaceflight dramatically, Musk has said.