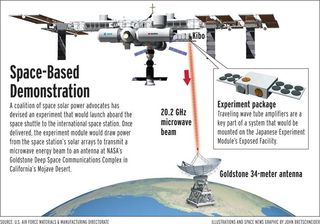 NASA hasbeen without an official spacesolar power program since 2002, although a coalition of governmentand private industry volunteers has kept alive visions of demonstrating how theUnited States might one day draw energy from the sun and transmit it to Earthvia microwave beams.

Thevolunteers were disappointed in December upon learning that NASA would notprovide $55 million they had asked for to conduct a solar power beamingexperiment they had devised for the International Space Station. Theexperiment?s designers are hoping it will get another look by the Obamaadministration.

Theexperiment entails placing a system that includes traveling wave tubeamplifiers, which amplify radio frequency signals, outside the space station onthe Japanese Experiment Module?s Exposed Facility. The amplifiers, donatedby the U.S. Air Force Research Laboratory, would be moved to another locationon the space station to draw power from the station?s solar arrays and beamthem to Earth in microwave form.

While Obamahas not identified space solar power as an alternativeenergy source he would pursue, advocates are encouraged by his appointmentof longtime space solar power proponents Alan Ladwig and George Whitesides tosenior positions at NASA. These advocates note that Obama?s transition teamspecifically asked NASA about the space station power beaming experiment.

JohnMankins, who worked at NASA for 25 years and managed the space-based solarpower program, said NASA should play a part in U.S. attempts to achieve energyindependence.

?I don?tsee how NASA or the space program can stand aloof from these [alternativeenergy] efforts,? Mankins said. ?Whether or not there?s opportunity for spacesolar power, I think it?s premature to say.?

Mankins,who recentlydemonstrated for the Discovery Channel that a miniscule amount ofpower can be received from a 20-watt microwave beam transmitted over adistance of 92 miles (148 km), said the United States should conduct a thoroughstudy of end-to-end systems needed for space solar power, followed bytechnology experiments and demonstrations. The last such systems study wasdone 12 years ago, he said.

The conceptfaces a major barrier, however, in the high cost of launching satellites largeenough to transmit meaningful amounts of power to Earth, according to a whitepaper submitted by space solar advocate Charles Miller, president of SpacePolicy Consulting Inc. in Dayton, Ohio, to Obama?s transition team inNovember. The white paper recommends establishing a national space solar powerpolicy, assigning a lead federal agency and an incremental research program.The white paper said the cost of space solar power could be reduced if theUnited States develops more-affordable access to space and applies high-volumeassembly line techniques to satellite construction.

Alternativeenergy advocates are not the only ones interested in space solar power beaming;the U.S. military is also eyingthe technology as a possible means of delivering power to remote areas ofthe globe. The Air Force Academy, for example,  has begun building twosmall satellites to test the concept of transmitting solar power from space vialaser technology. That demonstration is expected to produce enough power toilluminate a single one-tenth-of-a-watt light emitting diode, or LED.

?I believeit is time for NASA and [the Defense Department] to collaborate on a project todemonstrate safe space-to-earth transmission of solar energy is possible, andscalable to a magnitude that can enhance national security interests,? Paytonsaid in the Sept. 30 letter.

InDecember, however, top NASA managers directed work on the project within theU.S. space agency to stop.

MackHenderson of Johnson Space Center in Houston, who has been NASA?s lead on thespace station demonstration, announced the decision in a Dec. 11 letter tomembers of the group.

?It is withheavy heart that I tell you that we have been asked to terminate all NASA?ssupport on the [space solar power] demo activity. This direction was justreceived from management and I wanted to pass it along to you as soon aspossible to avoid wasting any more additional work that you have mostgraciously been volunteering,? Henderson wrote.

One memberof the group, who asked not to be identified, expressed frustration that theprogram was canceled before the Obama administration took office.

?This is anopportunity for NASA to be involved in not only something that involves spacebut also energy and environmental issues,? said one team member, who asked notto be identified. ?I think NASA management was fearful that they were going tobe handed this mission.?