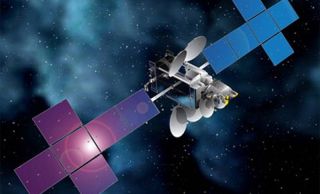 Russia's Proton rocket, in the first flight of its latest upgrade, on June 10 placed the Intelsat-31 commercial telecommunications satellite into geostationary-transfer orbit. The satellite was reported in good health after separation from the rocket despite an underperformance of the Proton's third stage.
(Image: © Space Systems Loral)

PARIS — An International Launch Services Proton rocket, in the first flight of its latest and potentially final series of upgrades, on June 10 placed the Intelsat 31 commercial telecommunications satellite into geostationary transfer orbit.

Despite a problem with the rocket's second or third stage, one of which apparently underperformed, the Proton's Breeze-M upper stage was able to compensate with a longer burn sequence to insert the 6,450-kilogram satellite into the correct orbit.

Satellite fleet operator Intelsat said the satellite, built by SSL of Palo Alto, California, was healthy in orbit and sending signals after its release, some 15 hours and 31 minutes after liftoff, by the Breeze-M stage.

Intelsat will use the four 69.6-megahertz C-band transponders for its own business in Latin America. Intelsat-31 is designed to provide 20 kilowatts of power to its payload at the end of its 15-year service life.

Luxembourg- and McLean, Virginia-based Intelsat said before the launch that depending on the precision of orbital injection, Intelsat-31 could hope for a service life of 20 years or more. It was not immediately clear whether the third-stage issue would force the satellite to use more fuel than expected to travel to its final orbital slot and limit its service life. Intelsat said initial indications were that there would be no reduction in service life.

Reston, Virginia-based ILS, which sells Protons globally for Moscow-based Khrunichev Space Center, expects Proton to remain on the market for another 10 years as Russian authorities gradually introduce the new Angara rocket family, whose heavier version is designed to replace Proton in the middle of the next decade.

John Palme, ILS vice president for operations, said the latest Proton upgrade features lighter-weight, but stronger, metallic structures and high-precision tooling that, taken together, will permit Proton to launch an additional 150 kilograms into geostationary transfer orbit. That would mean a total satellite mass of slightly more than 6,300 kilograms.

ILS has said it is preparing Proton modifications to allow the rocket to attract owners of smaller satellites that would launch in pairs on a Proton. The commercial satellite market has bifurcated into both lighter and heavier satellites, especially as satellite fleet owners adopt electric propulsion. An all-electric satellite can weigh 50 percent less than the same satellite using conventional chemical propellant.