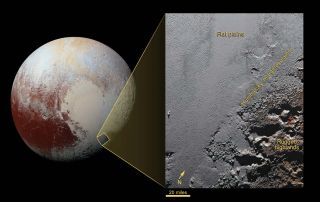 A highly detailed view of Pluto's surface, at the boundary between the icy plain of Sputnik Planum and the rugged highlands known as Krun Macula.
(Image: © NASA/JHUAPL/SwRI)

Pluto's underworld has been revealed in a new image that shows the boundary between vast, gray, icy plains and red, rugged highlands.

The new, highly detailed image of the boundary area shows the icy plains that belong to the larger, heart-shaped region known informally as Sputnik Planum and the much darker highlands informally known as Krun Macula. According to a statement from NASA, "Krun is the lord of the underworld in the Mandaean religion, and a macula is a dark feature on a planetary surface."

The new image comes from NASA's New Horizons spacecraft, which made a close flyby of Pluto in July 2015. The spacecraft has been steadily sending back to Earth the images and data it collected during the close encounter. Space.com created this new flyover video of Pluto to showcase the region shown in the New Horizons image.

Krun Macula's dark red color is apparent in the new image. Scientists said they suspect the red color comes from molecules called tholins, which can be formed when sunlight radiates organic compounds (those that contain carbon).

Besides its stunning color, this rough terrain astounds with its varied altitude. The highlands rise 1.5 miles (2.5 kilometers) above Sputnik Planum in some places, and parts are pocked with nearly circular pits that are between 5 and 8 miles deep (8 to 13 km), according to NASA. For comparison, the Grand Canyon has a maximum depth of one mile.

At the boundary between Sputnik Planum and Krun Macula, the image shows canyons that are more than 25 miles (40 km) long, 12 miles (19 km) wide at parts and almost 2 miles (3.2 km) deep. Analysis of the chemical composition of Pluto's surface shows that the valley floors are covered in nitrogen ice.

The pits and valleys that cover Krun Macula "may have formed through surface collapse, although what may have prompted such a collapse is a mystery," NASA officials wrote in the statement.

The image is a composite of three separate observations made within minutes of each other by different instruments aboard New Horizons during its flyby of Pluto.