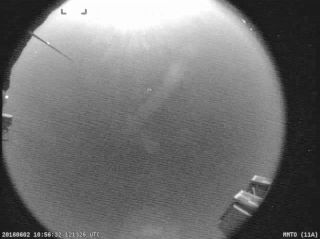 A brilliant fireball lights up the predawn skies over Arizona on June 2, 2016, as this still from a NASA meteor camera in the Santa Rita Mountains, southeast of Tucson, shows.
(Image: © NASA/MEO)

A small asteroid blazed a spectacular trail through Arizona's skies early Thursday morning (June 2), and the dramatic celestial event was caught on video.

A space rock about 10 feet (3 meters) wide slammed into Earth's atmosphere east of the Arizona town of Payson just before 4 a.m. local time (7 a.m. EST; 1100 GMT) Thursday, NASA officials said. The impact of asteroid with the air created a fireball so bright that it saturated NASA meteor cameras in the region, as as this video of the brilliant event shows.

The unnamed asteroid was likely traveling at about 40,200 mph (64,700 km/h) when it entered Earth's atmosphere, at an altitude of 57 miles (92 kilometers) above the Tonto National Forest, NASA officials said. Eyewitness accounts suggest that the object headed pretty much due south; it was last seen at an altitude of 22 miles (35 km) above the forest, the officials added.

"There are no reports of any damage or injuries — just a lot of light and few sonic booms," Bill Cooke, the head of NASA's Meteoroid Environment Office at the Marshall Space Flight Center in Huntsville, Alabama, said in a statement. "If Doppler radar is any indication, there are almost certainly meteorites scattered on the ground north of Tucson."

Such space rock incursions are far from rare; Earth gets hit by about 100 tons of space material every day.

Indeed, sensors placed by the United States government have recorded nearly 600 brilliant fireballs in the planet's skies over the past 20 years, NASA officials said. The most famous of these is probably the February 2013 explosion over the Russian city of Chelyabinsk, which was likely caused by an asteroid 65 feet (20 m) wide.

Impacts as powerful as the Chelyabinsk airburst — which released about 40 times more energy than the Arizona fireball, and injured more than 1,200 people (almost all of whom were cut by shards of flying glass from broken windows) — probably occur a few times per century, NASA officials said.

Editor's note: If you captured a view of the June 2 fireball over Arizona and would like to share it with Space.com and our news partners for a possible story or image gallery, send images and comments to Managing Editor Tariq Malik at spacephotos@space.com.