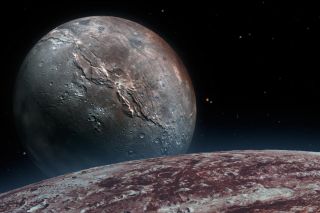 Get your Google Cardboards ready, because it's time to take a 3D trip to Pluto.

The new 7-minute Pluto tour, narrated by the science writer Dennis Overbye of the New York Times, is available for download from the Times' virtual reality app, and can be viewed through a Google Cardboard headset or on a plain smartphone screen for those who don't have one.

The film, called "Seeking Pluto's Frigid Heart," walks viewers through the arrival of the New Horizons spacecraft to Pluto last July before dropping them down on the surface and pointing out many alien geographic features on the surprisingly complex body. It's possible to look around 360 degrees to see the full extent of the dwarf planet, its largest moon, Charon, and the far-off shining of the sun.

You can download the New York Times VR App here (there are options for both Android and Apple) to see the awesome 3D Pluto views. You can also see a modified version in a computer browser.

The vivid 3D view, so different from the few pixels we had seen before New Horizons' approach, was pieced together for the film from New Horizons' data, with help from the Universities Space Research Association's Lunar and Planetary Institute in Texas. Even now, only around half of the images and measurements have been beamed back to Earth from the spacecraft; new data will be coming until October, and scientists will be hard at work analyzing it for a long time after.

The Times sent free Cardboards to all of its print subscribers last November and plans to send them to select online subscribers as well; Google also offers Cardboards for sale online and instructions for how to build your own (even out of a pizza box).