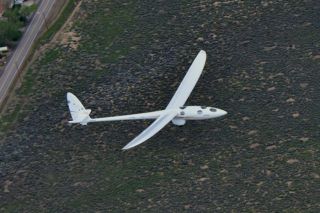 The Perlan 2 glider during a May 9 test flight over Minden, Nev.
(Image: © Airbus)

A decade after adventurer and pilot Steve Fossett sailed an engine-less airplane 50,722 feet into the stratosphere, a follow-on glider will attempt to best the record by riding mountain air waves to 90,000 feet, more than twice as high as commercial jets fly.

With backing from Airbus, the Perlan Project's second glider is wrapping up a series of test flights in Nevada before it will be shipped to Argentina in August to attempt a new altitude record.

From deep in southern Patagonia — the same place where Fossett and former NASA test pilot Einar Enevoldson, set their Aug. 30, 2006, sailplane altitude record — Perlan 2 will aim for 90,000 feet, a region where the air is so thin it's more like flying on Mars than Earth.

"Perlan 2 will teach us about the viability of wing-borne flight on Mars. Airbus Defense and Space currently builds Martian rovers, but we envision a time when manned or unmanned aircraft could become viable platforms for future Martian exploration," Airbus spokesman James Darcy wrote in an email to DNews.

The plane also will be outfitted with science instruments for climate change studies.

To reach 90,000 feet without engines, Perlan 2 will be towed into the air and released so its pilots can start searching for high-altitude updrafts of air, known as "mountain waves" around the Andes.

"Despite having no engine, the glider's true flight speed at that altitude will be more than 400 mph and the air density will be less than two percent of what it is at sea level," Airbus said in a press release.

The Hypersonic Spaceplanes Of Yesteryear

The pressurized aircraft will be launched from El Calafate, Argentia, near the edge of the Southern Patagonian Ice Field.

Perlan 2 made its debut flight in Redmond, Oregon last September.

The Perlan Project was founded by Fossett, a businessman and adventure-seeker best known for his record-breaking global journeys by sailboat, balloon and solo airplane. Fossett died in a plane crash in 2007.

"While Perlan certainly appealed to us for both its pioneering spirit and its potential to inspire, there are tangible scientific benefits that may influence future Airbus innovations," chief executive Tom Enders said in a statement.

"We'll learn a great deal about the controllability of aircraft at high altitudes and low air density, which may influence the design of future commercial aircraft optimized for flying higher than today's passenger jets," Enders said.