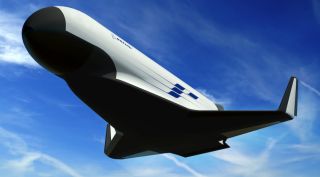 ORLANDO, Fla. – Here's a phrase that's not repeated everyday in the space community:

"You've heard Elon's comments … we want to go beyond that," Brad Tousley, the head of the tactical technology office at the Defense Advanced Research Projects Agency, said May 15.

Elon, of course, is Elon Musk, the optimistic, and some say visionary, founder of SpaceX with plans of eventually colonizing Mars. After landing three first-stage rockets, Musk has said SpaceX would inspect the rockets with plans to later re-fly most of them. [DARPA's XS-1 Military Space Plane Concept in Pictures]

But during a speech at the GEOINT 2016 conference here, Tousley said the agency's experimental spaceplane, known as XS-1, also has ambitious plans.

Ideally, DARPA's XS-1 spaceplane would launch 10 times in 10 days and carry payloads weighing as much as 1,360 kilograms into low earth orbit for $5 million.

DARPA is finalizing a request for proposals for the second phase of the XS-1 development program. The agency could release that acquisition document as early as this month, DARPA officials have said. A contract award, as part of a public-private partnership, could come as early as 2017 with the first flight tests in 2020.

Tousley said DARPA would contribute "a healthy fraction" to the development of the spaceplane. XS-1 has been the agency's top-funded space program the last two years. The White House asked for $50 million for the program in its budget request for fiscal year 2017.

Three industry teams have worked on the first phase of the program: Boeing and Blue Origin; Masten Space Systems and XCOR Aerospace; and Northrop Grumman and Virgin Galactic.

But during his speech here Tousley emphasized the importance of the quick turnaround for the spaceplane.

"One of the critical parameters that's coming out of the Phase 2 solicitation for XS-1 is the requirement that before we launch this asset for the first time, the vendors are going to prove to DARPA through a ground test of their propulsion system 10 times in 10 days," he said. "We're going to burn a lot of risk down."

Tousley said XS-1 may also act as a deterrent for the Defense Department as threats to national security satellites have emerged in recent years.

"If you have the ability to launch an asset in 24 hours, essentially on a moment's notice, then it may cause an adversary to think twice about exactly what it is they want to do from a threatening standpoint," he said. "We think just having that capability as being of a deterrent value."