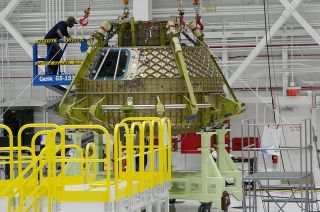 Boeing’s first CST-100 Starliner hull stands in one piece inside the Commercial Crew and Cargo Processing Facility (C3PF) at NASA's Kennedy Space Center in Florida after the Structural Test Article's upper and lower domes were mated together.
(Image: © Boeing)

Boeing's plans to launch NASA astronauts to the International Space Station took on a new shape this month, as a test vehicle for the company's commercial crew spacecraft came together in Florida.

On May 2, engineers and mechanics working in the same hangar where space shuttles were once maintained joined the upper and lower pressure domes for Boeing's CST-100 Starliner Structural Test Article (STA). The test spacecraft's two halves formed Boeing's first example of the capsule.

"Today, we're putting the upper and lower domes together so we can finally have a full-blown capsule," stated Barry Decker, Boeing's chief mechanic for the CST-100 Starliner, in a video the company posted online on Wednesday (May 11). "There are 216 holes I have to line up, perfectly." [CST-100: Images of Boeing's Private Space Capsule]

An overhead crane hoisted the upper dome off of its work platform and then slowly lowered it on top of the capsule's bottom dome. Before the halves were joined, Decker and his team inspected and prepped the seals holding the STA together.

"The Structural Test Article is our first major test vehicle for our integrated design for commercial crew," Danom Buck, Boeing's manufacturing and engineering manager, said. "It starts with a lot of detailed piece-part components. They build their way up to the upper half and the lower half. The next major logical step is joining the two and then testing them to make sure the sealing surfaces sealed properly."

"That is where we are at in the build campaign, and we are working toward getting the final vehicle put together," Buck said.

The STA will soon be joined in the Commercial Crew and Cargo Processing Facility (C3PF) by the similar halves for Boeing's first space-bound Starliner. The bottom dome for "Spacecraft 1" is there now; the upper dome will arrive in Florida later this month, Boeing spokeswoman Rebecca Regan told collectSPACE.

Both the test article and first spacecraft — the latter now targeted to launch on an uncrewed test flight in December 2017 — will undergo testing, including environmental trials, at Boeing's Huntington Beach, California facilities.

The tests must bear out that the capsules can handle the conditions of spaceflight as well as engine firings and the pressure of launch, ascent and re-entry. "In simple terms, it will be shaked, baked and tested to the extreme," Boeing's website explains.

In 2014, NASA chose Boeing as one of two companies to provide commercial launch services for its space station-bound crews. Both Boeing and SpaceX had been working toward a first crewed test flight by the end of 2017, but engineering challenges related to the mass of the CST-100 spacecraft and the aeroacoustics of its launch vehicle, as well as new docking software requirements set forth by the space agency, have extended Boeing's schedule by three months, Regan said.

Boeing is now targeting February 2018 for its first launch with two astronauts on board. A planned pad abort test will precede both the uncrewed and crewed flights in October 2017.

"The astronauts, what they are doing up there is good for mankind. My job is to make sure they get home for dinner. That's all that I care about — it has to be safe," said Decker.

Boeing is building the Starliner to fly atop a United Launch Alliance Atlas V rocket from Cape Canaveral Air Force Station in Florida. At the end of its mission, the capsule will return under parachutes and deploy airbags to cushion its touchdown in the southwestern United States.

Watch Boeing's video about the mating of the CST-100 Starliner capsule at collectSPACE.