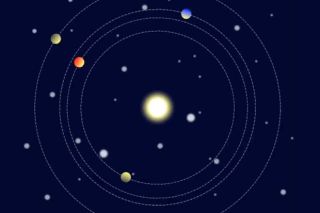 The four known planets in the Kepler-223 system are locked in fragile orbital resonances with each other, more than six billion years after their formation.
(Image: © W. Rebel)

Four alien worlds have somehow managed to remain locked in a delicate orbital embrace for more than 6 billion years, a new study reveals.

The four known exoplanets in the Kepler-223 system, which lies about 4,450 light-years from Earth, are in resonance, meaning their orbital periods are related to each other by a ratio of two small integers. (You can see a video explanation of Kepler-233's alien planets here.)

Some exoplanetary systems were previously known to harbor three worlds in resonance, but this is the first one identified with four, the researchers said.

"This is the most extreme example of this phenomenon," study co-author Daniel Fabrycky, an assistant professor of astronomy and astrophysics at the University of Chicago, said in a statement.

The finding comes as a surprise, the researchers said, because such resonances are fragile and the sun-like star Kepler-223 is more than 6 billion years old. So there have seemingly been lots of opportunities for asteroids, planetary building blocks and other objects zooming through the Kepler-223 system to break up the orbital configurations.

The four known Kepler-223 planets were discovered in 2014 by NASA's prolific Kepler space telescope, which to date has spotted more than 2,200 confirmed alien worlds. In the current study, a team of researchers, led by Sean Mills of the University of Chicago, used Kepler data to analyze how the Kepler-223 worlds affect one another's orbits. They also used that information to determine the planets' sizes and masses.

All four are "sub-Neptunes" between four and nine times more massive than Earth. They lie quite close to their host star: Kepler-223b completes one orbit in just seven days, while Kepler-223e has an orbital period of 19.7 days.

Researchers believe the gaseous outer planets in our own solar system — Jupiter, Saturn, Uranus and Neptune — probably migrated substantially as well after forming nearly 4.6 billion years ago. And though these planets are not in resonance now, they may initially have been tied to one another in such an orbital configuration, study team members said.

"Many of the multiplanet systems may start out in a chain of resonances like this, fragile as it is, meaning that those chains usually break on long timescales similar to those inferred for the solar system," Fabrycky said.

Our solar system's inner, rocky planets, on the other hand, probably formed more or less where they now lie, the researchers said. These worlds — Mercury, Venus, Earth and Mars — also came together in a different way, through the collision and accretion of rocky building blocks.

The new study was published online today (May 11) in the journal Nature.