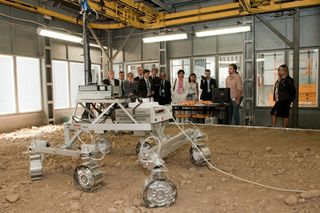 Europe and Russia are delaying launch of their ExoMars life-scouting rover mission to Mars from 2018 to 2020, the next time Earth and Mars are best aligned for interplanetary flight.

"Russian and European experts made their best efforts to meet the 2018 launch schedule for the mission," the European Space Agency said in a statement Monday.

But a panel investigating options for overcoming delays, concluded that rescheduling for July 2020 "would be the best solution."

"Additional measures will also be taken to maintain close control over the activities on both sides up to launch," the statement said.

Photos: Watching the Sunsets of Mars Through Robot Eyes

The delay means that the ExoMars mission, which will search for present-day or past life on Mars, will be launching during the same period as NASA's Mars2020, a follow-on mission to the ongoing Curiosity rover. In addition to assessing Mars' habitability, the NASA mission will gather samples for an eventual return to Mars.

In December, problems with a French-built science instrument for InSight, another NASA Mars mission, forced the probe to miss its March 2016 launch opportunity. That flight has now been retargeted for 2018.