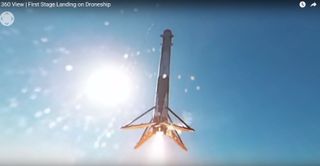 The historic April 8 landing of a SpaceX Falcon 9 reusable rocket booster on a drone ship is now yours to view in amazing, 360-degree glory.

The rocket landing took place on April 8, and the company broadcast live footage of the event, shot by cameras located a safe distance away from the ship.

But this new video is another level of awesome. Taken by a camera located on the ship, the rocket looks close enough to touch. And the 360-degree view allows the observer to stay focused on the rocket during its entire descent onto the landing pad.

This was SpaceX's 5th drone ship landing attempt in 15 months, and its first success. In each of the previous landing tries, the booster reached the drone ship but did not stay upright. The company has also made one successful landing on solid ground. The achievement marks a significant step toward SpaceX's goal of making its rockets totally reusable.

Before making its historic touchdown, the Falcon 9 rocket launched from Florida's Cape Canaveral Air Force Station, carrying one of the company's Drago cargo vehicles. The Dragon capsule continued its journey toward the International Space Station, where it delivered crew supplies, station hardware, and science experiments. This is SpaceX's eighth attempted cargo delivery run for NASA, and the company has secured a second cargo delivery contract with the agency.

Along with Boeing, SpaceX also has a contract with NASA to deliver crew to the space station. This week, SpaceX announced that it plans to send one of its Dragon capsules to Mars as early as 2018. The company's CEO, billionaire entrepreneur Elon Musk, has said that he has plans for the company to participate in human exploration and eventual colonization of the Red Planet.

The private spaceflight company Blue Origin is also building (and landing) reusable rockets. Recently, the company showed that it can launch and land the same suborbital rocket booster three times. Blue Origin's founder and CEO, Jeff Bezos — who is also the founder and CEO of Amazon.com — has said that the company is working on orbital rockets that it also plans to make reusable.