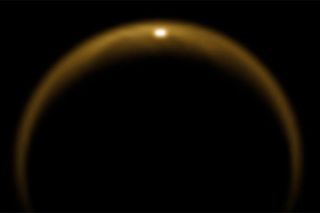 This image, taken by the Cassini spacecraft, shows the first flash of sunlight reflected off a hydrocarbon lake on Saturn's moon Titan. The July 2009 image confirmed the presence of liquid in the moon's northern hemisphere.
(Image: © NASA/JPL/University of Arizona/DLR)

A new study of eight years of radar data collected by the Saturn-orbiting Cassini spacecraft shows that the planet's largest moon, Titan — the only other body in the solar system besides Earth where liquids pool on the surface — has a sea of pure methane.

Before Cassini, scientists had expected Titan's seas to be dominated by ethane, since sunlight breaks apart methane and converts it into the more complex ethane hydrocarbon.

Scientists suspect that methane rain may be regularly filling the sea, or that ethane is locked in the sea's crust, or flowing into the adjacent sea, according to a press release about the study, which was published in the March 11 issue of Journal of Geophysical Research Planets.

PHOTOS: Where in the Solar System is it Possible for Alien Life?

The findings are based on radar observations made by Cassini between 2007 and 2015. Those measurements of heat given off by Ligeia Mare were combined with results of a 2013 experiment that bounced radar waves off the seafloor, which allowed scientists to estimate the sea's depth.

Ligeia Mare, which turns out to be as deep as 525 feet, also likely sports a layer of organic-rich sludge on its floor, the scientists said.

"It's a marvelous feat of exploration that we're doing extraterrestrial oceanography on an alien moon," Cassini scientist Steve Wall, with NASA's Jet Propulsion Laboratory in Pasadena, Calif., noted in the press release.

Cassini, which has been studying the Saturn system for almost 12 years, has revealed that almost 2 percent of Titan’s 620,000 square miles of real estate are covered in liquid.

The moon has three large seas, all located in the northern polar region, that are surrounded by small lakes. So far, just one large lake has been found in Titan's southern hemisphere.