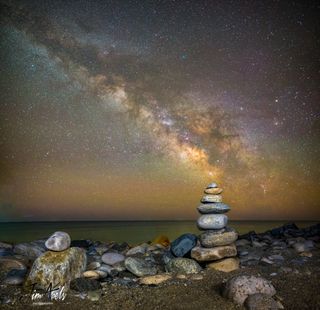 Astrophotographer Jim Abels took this image of a comet and the Milky Way from Montauk, New York in April 2016.
(Image: © Jim Abels/www.jimabels.com)

At the very northern tip of Long Island in New York is a beautiful place with a dark sky view over the Atlantic Ocean. And that is where astrophotographer Jim Abels went (Montauk, specifically) to capture this stunning of the Milky Way and a comet in April.

"Overlooking the vast Atlantic Ocean, I composed a view of the stacking rocks (cairns) in the foreground with a crisp view of our Milky Way galaxy up above. Surprisingly, a bright green dot appeared above the core of the Milky Way," Abels wrote in an email to Space.com.

The green dot is Comet 252P/LINEAR . It was discovered on April 7, 2000, by researchers from the Lincoln Near Earth Asteroid Research program (an MIT Lincoln Laboratory program funded by NASA and the U.S. Air Force). The comet's core is estimated to be 750 feet (230 meters) across.

Comet 252P/LINEAR made a close flyby of Earth earlier this year on March 21, when the comet came within 3.5 million miles (5.6 million kilometers) of Earth. A second comet, called 2016 BA14, came even closer to Earth on March 22 when it zipped by at a range of 2.1 million miles (3.4 million km). You can see a video of the double-comet flyby here.

Abels used a Nikon D750 camera with a Samyang 24mm f/1.4 lens at 15 sec exposures in ISO – 5000. Six images were stitched and processed in Lightroom to create this shot.