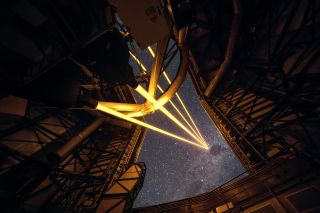 The Four Laser Guide Star Facility for the adaptive optics system on the European Southern Observatory's Very Large Telescope in Chile is activated for the first time in this amazing view taken on April 26, 2016. The lasers help the Very Large Telescope cancel out the blurring effects of Earth's atmosphere and take sharp images of the night sky.
(Image: © ESO/F. Kamphues)

Move over Death Star, there's a new laser-toting installation in town, and this one will give astronomers a better view of galaxies far, far away.

These spectacular views of lasers firing up into the cosmos come from the European Southern Observatory in Chile's Atacama Desert, where scientists activated the new Four Laser Guide Star Facility for the first time this week. The laser system, which switched on Tuesday (April 26), is part of an advanced new adaptive optics system on ESO's Very Large Telescope at the Paranal Observatory.

Adaptive optics systems allow telescopes to adjust the shape of their mirrors to filter out the blurring effects of Earth's atmosphere. The new Four Laser Guide Star Facility, which ESO touted as the most powerful of its kind in the world, fires four 22-watt lasers into the upper atmosphere, where they hit sodium atoms and make them glow like artificial guide stars to serve as a reference for the VLT's adaptive optics system.

"The artificial stars allow the adaptive optics systems to compensate for the blurring caused by the Earth's atmosphere, so that the telescope can create sharp images," ESO representatives wrote in an image description. "Using more than one laser allows the turbulence in the atmosphere to be mapped in far greater detail, to significantly improve the image quality over a larger field of view.

ESO representatives said the techniques developed to build the Four Laser Guide Star Facility will inform work on the adaptive optics system for a giant new telescope, the European Extremely Large Telescope, which is slated to begin operations in Chile in 2024. ESO officials billed the new telescope, with its 128-foot (39-meter) main mirror, as "the world's biggest eye on the sky."