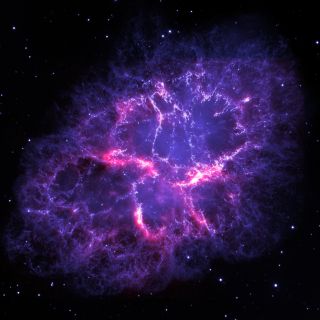 The famous Crab Nebula, as seen by the Hubble and Herschel space telescopes. NASA tweeted out this photo on April 21, 2016, in honor of the musician Prince, who died that day at the age of 57.
(Image: © ESA/Herschel/PACS/MESS Key Programme Supernova Remnant Team; NASA, ESA and Allison Loll/Jeff Hester (Arizona State University))

NASA paid its respects to Prince with a gorgeous space image that recalled the late musician's most famous album, Purple Rain.

"A purple nebula, in honor of Prince, who passed away today," NASA officials tweeted Thursday (April 21) along with the photo, a composite view of the Crab Nebula that combines imagery from the agency's iconic Hubble Space Telescope and the European Space Agency's Herschel Space Observatory.

The Crab Nebula, which lies about 6,500 light-years from Earth, is a supernova remnant — a structure shaped by the explosive death of a massive star. Such stars burn incredibly brightly and die young, so NASA's photo tribute seems doubly appropriate: Prince, lauded as one of the most talented and influential musicians of his generation, was just 57 when he died.