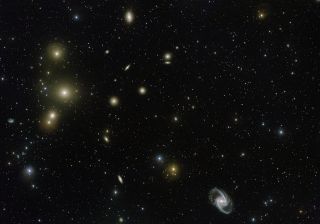 This dazzling photo features the Fornax Cluster in the southern hemisphere constellation of Fornax. The mass of galaxies — large, small, elliptical and spiral — holds many mysteries to be uncovered. The image was snapped by the VLT Survey Telescope at ESO’s Paranal Observatory in Chile and released Apr. 13, 2016.
(Image: © ESO)

The Southern Hemisphere constellation of Fornax, which means "The Furnace," contains a mass of galaxies known as the Fornax Cluster, which takes center stage in these striking views from a telescope in Chile.

A new Fornax galaxy cluster video and image, which were unveiled today (April 13), were captured by astronomers with the European Southern Observatory using the Very Large Telescope. Researchers used the VLT's Survey Telescope at Paranal Observatory in Chile's Atacama Desert. The observations reveal that the Fornax cluster is home to a host of galaxies of various types and sizes.

Galaxy clusters demonstrate gravity's power over long distances, with the gravitational influence of dark matter and the visible galaxies themselves leading to the cosmic groupings. These cosmic clusters typically contain from 100 to 1,000 galaxies at a width of 5 to 30 million light-years across. (One light-year is the distance light travels in a year, about 6 trillion miles or 10 trillion kilometers). [When Galaxies Collide: Amazing Photos of Galactic Crashes]

The Fornax Cluster, at roughly 65 million light-years from Earth, includes about 60 large galaxies and about as many dwarf galaxies. The centerpiece of this cluster is NGC 1399, which is known as a cD galaxy — a type often considered as a "galactic cannibal," according to ESO officials.

"This is because they have grown by swallowing smaller galaxies drawn by gravity towards the center of the cluster," ESO representatives wrote in an image description.

A team of astronomers using data from ESO's VST discovered a bridge of soft light between NGC 1399, at the center of the trio of blurry balls of light on the left of the image, and NGC 1387. This find, which is not visible in this image, supplies evidence for the effects of gravity in creating and changing these clusters.

On the bottom right side of the image is NGC 1365, a large barred spiral galaxy with a secret — a supermassive black hole  at its heart.

ESO's VLT Survey Telescope is 2.6 meters in diameter and was created to perform large-scale surveys of the sky with a huge corrected field of view and OmegaCAM — a 246-megapixel camera designed specifically for this task. The VST quickly provides deep images of massive swaths of sky, as compared to ESO's Very Large Telescope which focuses on details of particular cosmic targets.