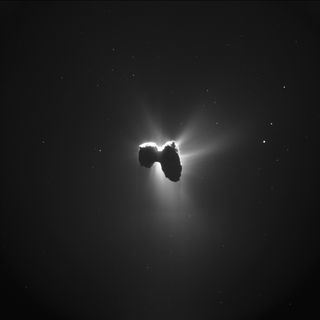 By cooking up a faux comet, scientists have produced the first formation of a key sugar required for life as we know it. By creating ices similar to those detected by the European Space Agency's Rosetta mission, which made the first landing on a comet, scientists were able to produce ribose, a sugar that serves as an important ingredient in RNA, an essential ingredient for life.

"There is evidence for an 'RNA world' — an episode of life on Earth during which RNA was the only genetic material," Cornelia Meinert, an associate scientist at the University Nice Sophia Antipolis, told Space.com by email. Meinert led experiments that dosed icy materials produced in a laboratory with radiation similar to what comets would have received in the early life of the solar system, resulting in the creation of ribose.

"At a certain point in prebiotic evolution, the availability of ribose would have been, therefore, necessary for life to have started," Meinert said.  [Watch: Comets - The Seeds of Life from Beyond the Solar System]

Organisms on Earth are made up of DNA and RNA— the genetic material that controls organisms' physical makeup. Their production has remained a long-standing question since their discovery, as has the origin of the important molecules that they comprise. Many of these molecules would not have survived in the high temperatures of the solar system where Earth formed, so scientists suspect that comets, which formed in cooler regions but travel inward, might have delivered organic material when they crashed into Earth.

To test this theory, Meinert and her colleagues recreated ices detected by Rosetta's Philae lander when it touched down on Comet 67P in 2014. In a lab, they created interstellar ices under what Meinert called "realistic astrophysical conditions" — in other words, within a vacuum, surrounded by low temperatures. Then, they blasted the samples with radiation simulating energy from the young sun, which was far more active than today's star, along with cosmic rays from the rest of the galaxy. Some of the material from the ices evaporated, while the leftover material created an organic residue. Sampling this residue revealed not only sugars but also amino acids, alcohols and other material.

"We were confronted with a very complex sample containing a huge diversity of molecules," Meinert said. "The identification of individual compounds was, therefore, very difficult."

By combining an instrument with higher-resolution power than utilized by previous techniques with an optimized method to selectively detect and extract sugar and sugar-related molecules, the team overcame these challenges to detect ribose and other sugars in larger quantities than previously estimated. The scientists deemed the material "major molecular constituents" of condensed ices found in space.

The research was published online today (April 7) in the journal Science.

When Philae visited Comet 67P, it carried a Cometary Sampling and Composition Experiment (COSAC) instrument, which employs a gas chromatograph (GC) to analyze material and a mass spectrometer (MS) to measure their masses. COSAC detected 16 organics on the comet, but none were the sugars and amino acids that mission planners had hoped to see.

"After landing on Comet 67P, we tried to employ the full GC-MS mode of COSAC, which would have been sensitive enough for amino acids and sugar molecules," COSAC co-investigator Uwe Meierhenrich told Space.com by email. Meierhenrich, a professor at the University Nice Sophia Antipolis, was a co-author on the study.

But Philae's landing did not go smoothly; instead of anchoring to the comet, the tiny spacecraft bounced across its surface. As a result, COSAC and other instruments couldn't perform all of the experiments they had planned.

"We did not receive enough samples from Philae's drilling and distribution system because of the unpredicted 'vertical landing position' of Philae," Meierhenrich said.

However, the experiments revealed a closer kinship of the evolved ices to meteorites than had been suspected. Organic material has been found in some meteorites, and both meteorites and comets are considered possible sources of Earth's water.

"We assume that the organics found in meteorites form by very similar initial reactions as compared to the organics in comets," Meierhenrich said.