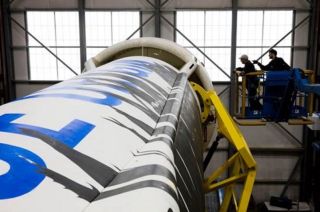 The private spaceflight company, which was established by Amazon.com founder Jeff Bezos, aims to launch its New Shepard rocket to suborbital space, and bring it back to Earth in a soft landing, for the third time Saturday (April 2).

"Pushing the envelope. Restarting BE-3 fast @ high thrust, just 3600 ft from ground. Impact in 6 sec if engine doesn’t restart & ramp fast," he added in another tweet, referring to New Shepard's BE-3 engine.

In November 2015, this same rocket — which is topped with a crew capsule — became the first booster ever to travel to space and then come back to Earth in a successful soft landing. The rocket landed again this past January after another uncrewed suborbital jaunt. (In December, SpaceX landed the first stage of its Falcon 9 booster, becoming the first entity to pull off this maneuver during an orbital launch.)

And if all goes well, we should get a good look at much of the spaceflight action.

"We’ll have drone cameras in the air and hopefully will get good aerial footage to share," Bezos said in another tweet on Friday.

Tests such as Saturday's planned flight are part of Blue Origin's effort to develop fully and rapidly reusable launch systems, which is also a priority for SpaceX and its billionaire founder, Elon Musk.

Bezos and Musk believe reusability is key to opening the heavens to exploration. Indeed, Musk has said that reusable rockets could slash the cost of spaceflight by a factor of 100, perhaps making Mars colonies economically feasible.