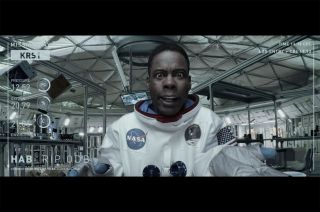 Comedian Chris Rock stands in for Matt Damon in a parody of "The Martian" shown during the 88th Academy Awards on Sunday, Feb. 28, 2016.
(Image: © ABC)

"The Martian" was left stranded without any Oscars on Sunday night (Feb. 28) at the 88th Academy Awards.

Ridley Scott's science fiction film about a NASA astronaut (Matt Damon) being left for dead on Mars received seven nominations — including Best Picture and Best Actor — but ended the evening with no wins.

"It's pretty cool just to be nominated," wrote Andy Weir, author of the book on which the "The Martian" is based, in a post on Facebook. "Slowly but surely, science fiction is worming its way into popular culture and mainstream entertainment. I'm proud to be a small part of that." [Photos from 'The Martian': Matt Damon on 'Mars']

Still, it was other science fiction and dramatic films that ultimately brought home the Oscars.

Drew Goddard, who wrote the screenplay for "The Martian" based Weir's book, lost out to Charles Randolph and Adam McKay for "The Big Short." Visual effects artists Richard Stammers, Anders Langlands, Chris Lawrence and Steven Warner, who transformed Jordan into the Red Planet, were passed over in favor for team behind "Ex Machina."

Paul Massey, Mark Taylor and Mac Ruth, whose sound mixing on "The Martian" was recognized with a nomination, and Oliver Tarney, who was similarly honored for sound editing, lost to the sound engineers on "Mad Max: Fury Road." The same was true for "Martian" production designers Arthur Max and Celia Bobak.

Damon, who played Ares III crewmember Mark Watney, lost to a different type of frontiersman, Leonardo DiCaprioin "The Revenant," for Best Actor in a Leading Role.

And it was "Spotlight," about the real journalists who uncovered systemic child sex abuse in the Catholic church, that won the Academy Award for Best Picture, over the "The Martian."

The only other space-related film to be nominated this year, the animated short "We Can't Live Without Cosmos," was also left without an Oscar — the Academy Award going to "Bear Story." Directed by Konstantin Bronzit, "Cosmos" follows two cosmonauts and friends who try to do their best in their everyday training life to make their common dream a reality.

The evening, however, was not completely devoid of happy space-themed moments.

Josh Singer, who with Tom McCarthy was the writing team behind the film "Spotlight," won for best original screenplay. Singer is now working on the script for Universal Studios' Neil Armstrong biopic, based on historian James Hansen's biography "First Man," to be directed by Damien Chazelle ("Whiplash").

C-3PO, R2-D2 and BB-8 from "Star Wars" took to the stage to pay tribute to composer John Williams, who was nominated for his 50th Academy Award.

And Buzz Lightyear, the fictional space ranger (and sometimes International Space Station resident), was literally drawn onto the stage with his "Toy Story" co-star, Woody, to present the Oscar for best animated film.

Comedian Chris Rock used his platform as the ceremony's host to raise attention to the lack of diversity among this year's nominees. As part of this, Rock took Damon's place in a re-staged clip from "The Martian," where NASA Administrator Theodore Sanders (Jeff Daniels) and NASA public affairs officer Annie Montrose (Kristen Wiig) debated if it was worth spending $2500 "white dollars" to save a "black astronaut."

Robert Z. Pearlman is a Space.com contributing writer and the editor of collectSPACE.com, a Space.compartner site and the leading space history-focused news publication. Follow collectSPACE.comon Facebookand on Twitter at @collectSPACE. Follow us @Spacedotcom, Facebook and Google+. Original article on Space.com.