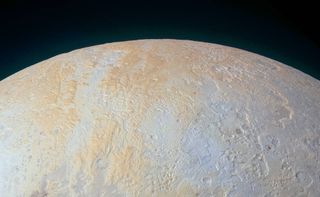 The frozen canyons of Pluto's north pole are represented in enhanced colors in this image taken from the New Horizons spacecraft on July 14, 2015. The surrounding terrain shows higher elevations in yellow and lower elevations in shades of blue-gray.
(Image: © NASA/JHUAPL/SwRI)

The enhanced-color image, which was captured by NASA's New Horizons spacecraft during its historic Pluto flyby last July, shows a region informally named Lowell Regio, after Percival Lowell, the founder of Arizona's Lowell Observatory and the person who began the search that led to Pluto's discovery in 1930 (by American astronomer Clyde Tombaugh).

Several canyons run parallel across Lowell Regio, the photo reveals. The widest one measures about 45 miles (75 kilometers) across;. smaller, parallel canyons to the east and west of it are each about 6 miles (10 km) wide.

"The degraded walls of these canyons appear to be much older than the more sharply defined canyon systems elsewhere on Pluto, perhaps because the polar canyons are older and made of weaker material," NASA officials wrote in a description of the image, which was released Thursday (Feb. 25). "These canyons also appear to represent evidence for an ancient period of tectonics."

The photo also depicts a number of reddish pits, the largest of which are about 45 miles (70 km) across and 2.5 miles (4 km) deep. These mysterious features may indicate where subsurface ice melted and the ground fell in, NASA officials said.

The composition of Lowell Regio is intriguing and unusual. Some of the area's higher elevations show up in a yellow color not seen elsewhere on Pluto. The bluish-gray terrain in the image represents lower elevations and latitudes.

"One possibility is that the yellow terrains may correspond to older methane deposits that have been more processed by solar radiation than the bluer terrain," Will Grundy, New Horizons composition team lead from Lowell Observatory, said in a statement published with the image description.

New Horizons took the image on July 14 from a distance of 21,000 miles (33,900 km) from Pluto's surface, about 45 minutes before the probe's closest approach to the dwarf planet.

The spacecraft is now speeding toward a small object called 2014 MU69, which lies 1 billion miles (1.6 billion km) beyond Pluto. New Horizons will study 2014 MU69 up close on Jan. 1, 2019, if NASA approves and funds a proposed extended mission.