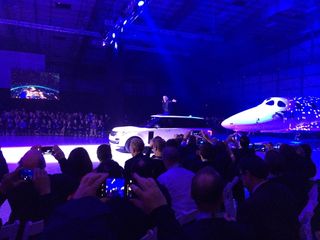 MOJAVE, Calif. — If you asked me to choose one indelible memory from Virgin Galactic's SpaceShipTwo unveiling gala Friday (Feb. 19), I would hem and haw for a few seconds, and then ultimately ask you to wait. There are just so many surreal moments from which to choose.

For example, do I go with the actual unveiling itself, which featured Virgin Galactic founder Sir Richard Branson standing — with arms outstretched like king-of-the-world Jack Dawson in "Titanic" — through the sunroof of the Range Rover that towed the space plane into view, with the pumping music and saturating blue lights giving the hangar here at the Mojave Air & Space Port a dance-club vibe?

Or what about the revelation of the vehicle's name, VSS (for Virgin Spaceship) Unity, which came at the end of a 4-minute recorded message from astrophysicist and spaceflight enthusiast Stephen Hawking, who hopes to ride the spacecraft one day? [Photos: Virgin Galactic's VSS Unity Rolls Out]

But there's also Unity's christening, which occurred in a shower of milk when Branson, his daughter and his son-in-law helped the entrepreneur's granddaughter, Eva-Deia, smash a baby bottle against the vehicle's hull.

Oh, and the unveiling ceremony happened on Eva-Deia's first birthday. So, just after the christening, the big crowd sang "Happy Birthday" to the tot, with famed English soprano Sarah Brightman leading the chorus.

Harrison Ford attended the event but did not speak, whereas youngest-ever Nobel laureate Malala Yousafzai said a few words from afar. The 18-year-old Yousafzai, who fights for the right of girls in her native Pakistan and around the world to receive a quality education, contributed a video message, which played before VSS Unity was rolled out.

"I'm so excited for the unveiling of the spacecraft," said Yousafzai, who survived an assassination attempt by Taliban gunmen in October 2012. "It's such a great work, and it's a way that we are inspiring young people in this whole world to explore more, to go farther and to have no boundaries."

I also vividly remember the sea-green cocktails that filled a table near the back of the hangar toward the gala's end, and the loud, pounding drumbeats that ushered us to our seats for the start of the ceremony. (I remember thinking, "Did I wander into a luau?")

Such moments of spectacle are memorable. But now, after some reflection, I believe I know what will stay with me the longest — the sight of the sleek and beautiful VSS Unity itself, its blazing, shiny newness a testament to the power of hope, hard work and perseverance.

"That was a hard day. I remember greeting Richard in this very hangar hours after the accident," Virgin Galactic CEO George Whitesides said during Friday's ceremony. "It was a moment when years of hard work were put into public doubt, and the life of a brave test pilot, a family man and a friend to many of us, was lost."

But company representatives decided that very day to keep pushing ahead with their dream to get a commercial spaceline up and running — to eventually take paying customers to suborbital space and back aboard SpaceShipTwo, Whitesides said.

The history of spaceflight is full of moments like these — times when serious, and sometimes even fatal, failures prompt soul-searching and reassessment. I want humanity to push farther and farther out into the cosmos, to learn more, to explore more. So that's what I thought of when I beheld VSS Unity sitting in that hangar, after the music had stopped and the cocktails had been cleared away: Here is humanity bouncing back and pushing forward.