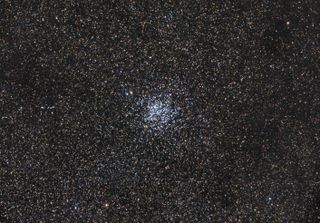 The Wild Duck cluster, also called M11, was likely named for a distinctive wedge-shape group of stars that resembled a V-shaped flock of wild ducks in flight. The image was taken by Ron Brecher from Guelph, Ontario in May 2012.
(Image: © Ron Brecher)

The Wild Duck cluster, also called M11, was likely named for a distinctive wedge-shape group of stars that resembled a V-shaped flock of wild ducks in flight. The image was taken by Ron Brecher from Guelph, Ontario in May 2012 and he recently shared it with Space.com.

"There are so many stars! This shot really makes you think about the scale of the universe," Brecher wrote in an email description of the photo. "The image captures an area only a couple of times the size of the moon. Can you imagine the number of stars that could fill an all-sky image? It's literally astronomical." [Amazing Night Sky Images by Stargazers]

M11 contains thousands of stars and is a little more than 5000 light years away. A light-year is the distance light travels in one year, or about 6 trillion miles (10 trillion kilometers). It’s been estimated to be more than 200 million years old.

There are also darker “lanes” that seem to have fewer stars; these are dark nebulae in our own galaxy caused by dust and gas.   The color of the stars in this image tells us about their temperature, with redder stars being the coolest and the white and bluish stars that dominate the cluster being the hottest.

Editor's note: If you have an amazing night sky photo you'd like to share with us and ournews partners for a possible story or gallery, send images and comments in to spacephotos@space.com.