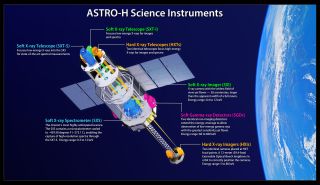 This illustration shows the locations and energy ranges of ASTRO-H science instruments and their associated telescopes. One keV equals 1,000 electron volts, which is hundreds of times the energy of visible light.
(Image: © JAXA/NASA's Goddard Space Flight Center)

Japan will launch a new X-ray observatory early Friday morning to probe some of the universe's deepest mysteries, and you can watch the liftoff live.

The Japanese Aerospace Exploration Agency's (JAXA) ASTRO-H spacecraft is scheduled to launch atop an H-IIA rocket Friday (Feb. 12) at 3:45 a.m. EST (0845 GMT) from the Tanegashima Space Center in Kagoshima, Japan. You can watch it live here at Space.com, courtesy of NASA and JAXA.

ASTRO-H is designed to help scientists better understand a wide variety of energetic events throughout the universe, from the evolution of galaxy clusters to powerful supernova explosions, NASA officials said. (NASA is a partner on the ASTRO-H mission; the agency's Goddard Space Flight Center in Greenbelt, Maryland, provided one scientific instrument and two telescope mirrors.) [Supernova Photos: Great Images of Star Explosions]

The new observatory will be 10 times more sensitive to X-ray light than its Japanese predecessor, the Suzaku spacecraft, which operated between 2005 and 2015. ASTRO-H will study a wide range of high-energy light using four co-aligned focusing telescopes and four advanced instruments, NASA officials said.

"We see X-rays from sources throughout the universe, wherever the particles in matter reach sufficiently high energies," Robert Petre, chief of Goddard's X-ray astrophysics laboratory and the U.S. project scientist for ASTRO-H, said in a statement.

"These energies arise in a variety of settings, including stellar explosions, extreme magnetic fields, or strong gravity, and X-rays let us probe aspects of these phenomena that are inaccessible by instruments observing at other wavelengths," Petre added.

ASTRO-H's four instruments allow it to study the universe in a broad energy range far beyond the spectrum of visible light, which ranges from 2 to 3 electron volts (eV). The instruments can measure anything from low-energy ("soft") X-rays of 300 eV to soft gamma-rays of up to 600,000 eV, NASA officials said.

Goddard built mirror assemblies for two identical soft X-ray telescopes. One telescope focuses the light into a Japanese advanced wide-field camera. The other sends light into a soft X-ray spectrometer (SXS) that was also developed and built at Goddard.

Astronomers usually spread X-ray light out into a spectrum to learn more about the temperature, motion and composition of X-ray sources. But this technique dilutes the intensity of X-ray "colors," NASA officials said. The SXS instrument, on the other hand, should allow researchers to study the light at high intensity and high resolution.

To do this, the spectrometer will use a technique called microcalorimetry. When light particles (photons) hit the SXS detector, it will measure how much heat is generated. This requires the SXS detector to be cooled to close to absolute zero, at minus 459.58 degrees Fahrenheit (minus 273.1 degrees Celsius). The cooling is provided through supercold liquid helium and some mechanical and magnetic refrigerators, allowing SXS to stay cool for more than three years.

"The technology used in the SXS is leading the way to the next generation of imaging X-ray spectrometers, which will be able to distinguish tens of thousands of X-ray colors while capturing sharp images at the same time," Caroline Kilbourne, a member of the Goddard SXS team, said in the same statement.

ASTRO-H will join two other big-ticket space telescopes dedicated to observing the universe in X-ray light — NASA's Chandra X-ray Observatory and the European Space Agency's XMM-Newton spacecraft, both of which launched in 1999.