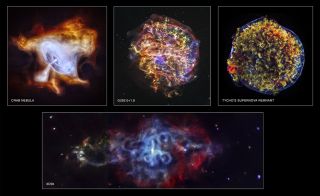 The agency's Chandra X-ray Observatory— one of NASA's "Great Observatories," along with the Hubble and Spitzer space telescopes and the now-retired Compton Gamma Ray Observatory — launched aboard the space shuttle Columbia on July 23, 1999, to view the universe in high-energy X-ray light.

Since its deployment, Chandra has trained its sharp eyes on objects ranging from nearby planets and comets to faraway supernovas and black holes. The instrument's observations over the past decade and a half have helped reshape and refine astronomers' understanding of the universe, NASA officials said. [15 Years with NASA's Chandra X-Ray Observatory (Video)]

"Chandra changed the way we do astronomy. It showed that precision observation of the X-rays from cosmic sources is critical to understanding what is going on," Paul Hertz, director of NASA's Astrophysics Division, said in a statement.

"We're fortunate we've had 15 years — so far — to use Chandra to advance our understanding of stars, galaxies, black holes, dark energy and the origin of the elements necessary for life," Hertz added.

Chandra was first proposed to NASA in 1976 as the Advanced X-ray Astrophysics Facility. But the observatory was renamed before launch for Indian-American astrophysicist Subrahmanyan Chandrasekhar, who won the Nobel Prize in physics in 1983 for his work on black holes.

Most people knew Chandrasekhar — who died in 1995 at age 84 — as "Chandra," which (appropriately enough) means "moon" or "luminous" in Sanskrit, mission officials said.

The Chandra telescope has observed gas that's about to fall into the maw of a black hole, traced the dispersion of heavy elements into space after supernova explosions and watched mammoth galaxy clusters form, among many other accomplishments. The observatory has also made key contributions to the hunt for mysterious dark matter and dark energy, which together make up about 96 percent of the universe.

For example, the Chandra telescope has helped map out the distribution of dark matter as revealed by collisions between galaxy clusters, mission scientists said.

The mission's total price tag is around $3 billion, including launch costs, NASA officials have said. But the observatory's longevity and scientific productivity make it a relative bargain, they added.

"Chandra continues to be one of the most successful missions that NASA has ever flown, as measured against any metric — cost, schedule, technical success and, most of all, scientific discoveries," said Martin Weisskopf, Chandra project scientist at NASA's Marshall Space Flight Center in Huntsville, Alabama. "It has been a privilege to work on developing and maintaining this scientific powerhouse, and we look forward to many years to come."