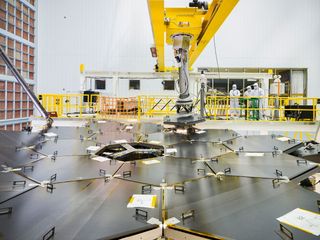 The biggest-ever space telescope is now one major step closer to completion.

On Wednesday (Feb. 3), technicians installed the 18th and final primary mirror segment on NASA's James Webb Space Telescope (JWST), an $8.8 billion observatory that's scheduled to launch in 2018 to investigate some of the biggest questions in astronomy.

"Scientists and engineers have been working tirelessly to install these incredible, nearly perfect mirrors that will focus light from previously hidden realms of planetary atmospheres, star forming regions and the very beginnings of the universe," John Grunsfeld, associate administrator for NASA's Science Mission Directorate in Washington, D.C., said in a statement. [Images: The James Webb Space Telescope]

"With the mirrors finally complete, we are one step closer to the audacious observations that will unravel the mysteries of the universe," Grunsfeld added.

JWST is billed as the successor to NASA's iconic Hubble Space Telescope. The new observatory features a much larger light-collecting surface than Hubble; with the 18 segments installed, JWST's primary mirror is 21.3 feet (6.5 meters) wide, compared to 7.9 feet (2.4 m) for Hubble.

Each of JWST's hexagonal mirror segments is about the size of a coffee table and weighs 88 lbs. (40 kilograms), NASA officials said. Workers at the agency's Goddard Space Flight Center in Greenbelt, Maryland, used a robotic arm to fit the last of the 18 sections into place on Wednesday.

"Now that the mirror is complete, we look forward to installing the other optics and conducting tests on all the components to make sure the telescope can withstand a rocket launch," JWST project manager Bill Ochs said in the same statement. "This is a great way to start 2016!"

Whereas Hubble's most famous images have been captured in visible light, JWST is optimized to view the universe in longer infrared wavelengths. Infrared light can penetrate dust clouds, allowing the observatory to look across vast stretches of the universe to study the formation of galaxies, stars and planets, mission team members have said.

Astronomers will also use JWST for a number of other purposes — including the search for possible signs of life in the atmospheres of relatively nearby alien planets.

"The Harris team will be installing the aft-optics assembly and the secondary mirror in order to finish the actual telescope," Gary Matthews, director of universe exploration at Harris Corp., said in the same statement.

"The heart of the telescope, the Integrated Science Instrument Module, will then be integrated into the telescope," Matthews added. "After acoustic, vibration and other tests at Goddard, we will ship the system down to [NASA's] Johnson Space Center in Houston for an intensive cryogenic [extremely cold temperature] optical test to ensure everything is working properly."