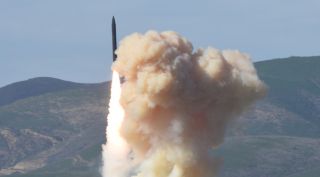 WASHINGTON – The U.S. Missile Defense Agency said it held a successful flight test of its ground-based interceptor Jan. 28, as part of an effort to correct long-standing problems with the missile's kill vehicle.

The test did not involve an intercept of a target, the agency said in a press release.

Navy Adm. James Syring, the head of the MDA, said during a presentation at the Center for Strategic and International Studies on Jan. 19 that the primary purpose of the test was to gather more data about the kill vehicle's divert and attitude control system, which helps steer the kill vehicle into its target. [The Most Destructive Space Weapons Concepts]

"This will be a great test in terms of engineering and learning," Syring said.

During the Jan. 28 test, an intermediate-range ballistic missile, full of countermeasures and decoys, was launched from an Air Force C-17 flying west of Hawaii. An AN/TPY-2 radar at the Pacific Missile Range Facility in Kauai, Hawaii and the Sea-Based X-band radar in the ocean north of Hawaii each tracked the target. The Ground Based Midcourse Defense (GMD) system received the tracking data, which led to the launch of the interceptor from Vandenberg Air Force Base in California, an MDA press release said.

The interceptor released a Raytheon-built CE-2 Exoatmostpheric Kill Vehicle, or EKV, which then performed a series of maneuvers to demonstrate the divert thrusters in space.

Industry and government teams were able to collect information on how the thrusters performed and were "thrilled" with the results, said Norm Tew, Boeing's vice president and general manager of the ground-based midcourse defense system.

"This was a remarkable data-collection opportunity," Taylor Lawrence, president of Raytheon Missile Systems, said in a Jan. 28 press release. "These are among our industry's most complex systems. Testing is critically important to ensuring the advancement of reliable kill vehicles for the protection of the U.S. homeland."

Boeing, the prime contractor on the GMD system, said that the test of thrusters is especially important because that technology could be used in the agency's next-generation kill vehicle, known as the redesigned kill vehicle.

A December 2010 intercept test that used the same kill vehicle variant, known as Capability Enhancement 2, failed in part because of the thrusters, Syring said. A 2014 Government Accountability Office study said the agency has spent more than $2 billion correcting and fixing problems associated with the CE-2. A 2014 test using the same kill vehicle variant resulted in an intercept and gave engineers a baseline for future improvements, industry officials said.

The next intercept test of the CE-2 kill vehicle is expected before the end of the year, Syring said.