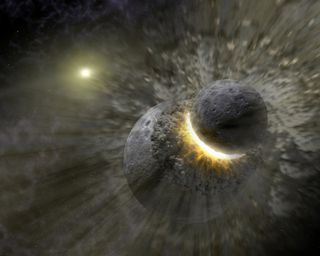 Earth's moon was born from a violent collision between the early Earth and a Mars-size object that scientists call Theia. New research suggests that the lunar rock debris from that crash mixed in with Earth's rocks.
(Image: © NASA)

NASA's plan to defend Earth from asteroids, a "rogue" planet that's just misunderstood and details on the two planet pile-up that created Earth's moon — it's Space.com's top stories of the week.

The ancient, dying star Betelgeuse is ejecting much of its mass into space, but doesn't show the increase in temperature scientists expected — so they're left wondering how this essential part of the star's life-cycle adds up. [Full Story: Dying Star Betelgeuse Keeps Its Cool ... and Astronomers Are Puzzled]

Massive solar eruptions send particles flying from the sun, but some particles go way faster than anticipated. A new study considers what might accelerate the superfast particles to near the speed of light. [Full story: Mysteriously Powerful Particles from Solar Explosions Unveiled in New Study]

An alien gas-giant, thought to fly freely through space, is actually in a system of its own — just a very, very spread out one. The planet's record-breaking orbit takes it 7,000 times further from its star than Earth is from the sun, and it takes 900,000 years to come full circle. [Full Story: Rogue Planet Finds Home in Biggest Solar System Ever Seen]

NASA's Cassini probe has started shifting its orbit around Saturn to prepare for its Sept. 15, 2017 plunge — where it will pass under the innermost rings 22 times before falling into the planet itself. Researchers call the maneuver Cassini's "Grand Finale." [Full Story: At Saturn, Cassini Spacecraft Adjusts Orbit for Titan-ic 'Grand Finale']

Runaway star hints at explosive past

A mysterious star, stained in carbon, is flying away from the Milky Way in a super-eccentric orbit. The likely culprit: a companion star's supernova explosion. [Full Story: Strange Superfast 'Cannonball' Star Likely Blasted from Supernova]

The newly-proposed planet orbiting far beyond Pluto, referred to as "Planet Nine," wouldn't be responsible for the periodic comet strikes that seem to hit Earth roughly every 27 million years. Some scientists suggest a far-out planet might disturb the comets orbiting in the Oort Cloud to cause such events, but Planet Nine is too small and too close by to be the culprit. [Full Story: Don't Blame 'Planet Nine' for Earth's Mass Extinctions]

(Plus, a new NASA videocautions that Planet Nine is still just an idea.)

Earth and moon rocks were thoroughly scrambled before the moon separated from Earth, suggesting that the collision that caused it — a Mars-sized rock hitting Earth — was more than just a glancing blow. [Full Story: Violent Impact That Created Moon Mixed Lunar and Earth Rocks]

The fungi are all right