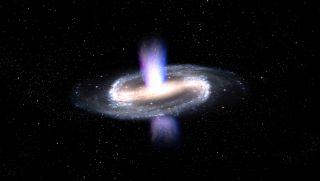 Winds blast from the supermassive black hole at the center of a spiral galaxy in this artist's concept.
(Image: © ESA)

A huge, windy swirl of gas — usually found in the largest, most active galaxies — commands the center of a spiral similar to the Milky Way and may disrupt the galaxy's star formation process, new research shows.

The galaxy, spotted by the European Space Agency's (ESA) XMM-Newton satellite telescope observatory, is, like the Milky Way, a spiral with a supermassive black hole at the center. But its center's ability to produce new stars is compromised due to a fierce wind coming from that black hole as it swallows up its surroundings, ESA officials said in a statement. The gases and winds swirl around the black hole at about 10 percent of the speed of light, the statement said.

While there is nothing unusual about finding swirling hot discs of space detritus surrounding the peripheries of supermassive black holes in the center of active galaxies, the phenomenon usually occurs in galaxies that have collided together, often the most massive elliptical galaxies. By contrast, this is a smaller spiral galaxy, called a "Seyfert."

Although the, Milky Way galaxy is not a Seyfert, both the Milky Way and this galaxy, called IRAS17020+4544, wind into a similar spiral shape. Unlike the Milky Way, however, a Seyfert has a bright core that shines across the entire electromagnetic spectrum.

The Seyfert galaxy is located 800 million light-years from Earth. Its enormous central black hole contains the mass of nearly 6 million suns. By contrast, Sagittarius A, the supermassive black hole at the center of our Milky Way galaxy, likely contains about 4.5 million times the mass of our sun.

"Of course, we cannot be sure, but our discovery implies that fast outflows like those found in IRAS17020+4544 may have once swept through our own galaxy during one of [its central black hole's] active phases," study co-author Matteo Guainazzi, an ESA astronomer currently at the Institute of Space and Astronautical Science of the Japan Aerospace Exploration Agency, said in the statement. "This possibility was not considered before, because this 'feedback' from X-ray winds was previously observed only in galaxies very different from the Milky Way."

The new work was detailed in The Astrophysical Journal in November.