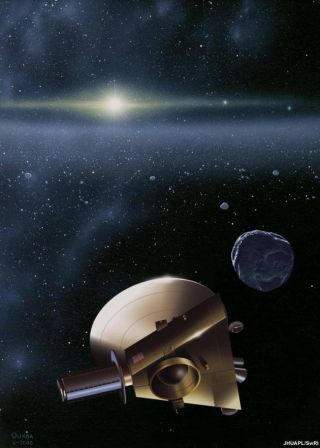 KBO: Artist's impression of the New Horizons spacecraft meeting up with a Kuiper Belt object. The Sun is more than 4.1 billion miles (6.7 billion kilometers) away. Jupiter and Neptune are visible as orange and blue stars to the right of the Sun. Though KBOs would not be so visible at any one moment, they're shown here to illustrate the extensive disk of icy worlds beyond Neptune.

BOULDER, Colorado -- Now headingoutward on its lengthy trek to tiny Pluto, NASA's New Horizons spacecraft is on course to zip by gigantic Jupiter early next year.

Engineersand scientists are plotting out an agenda of at-Jupiter investigations. Thanksto high-tech instruments onboard the craft, new looks at the gas giant areslated, as are views of several moons circling the planet.

Butwhile science at Jupiter is to be gained, the real game is to shakeout NewHorizons long before it encounters the Pluto system in 2015. Earlier this yearthe spacecraft photographed both Jupiter, and its final destination, Pluto.

NewHorizons roared into space in January of this year--the first mission to carryout an initial reconnaissance of Pluto-Charon and the Kuiper Belt at the edgeof our solar system.

"Thefirst objective at Jupiter is to hit the keyhole to get us to Pluto. If wedon't do that...nothing else matters," said Alan Stern, principal investigatorfor New Horizons and executive director of the Space Science and EngineeringDivision here at Southwest Research Institute (SwRI).

Hittingthat little window in space is a priority, a predetermined but needed course correctionfor New Horizons. The adjustment will place the probe on a trajectory to attaina closest approach of Pluto some 8 years hence, on July 14, 2015.

Likea test drive of a new automobile, Stern said that New Horizons zooming byJupiter is a full-up practice run. The flyby will show how the probe handlesand help flesh out any unknown issues lurking within the spacecraft--fromsoftware and commands to the science instruments.

NewHorizons is using two of its 16 thrusters more than expected, Stern said. "Sowe're going to have to limit our appetite and learn to fly the spacecraft alittle bit differently...or we'll use them all up before we get to Pluto."

"Plutois a one-shot," Stern told SPACE.com. "I don't fundamentally want thingsto go wrong...but I want them to go wrong at Jupiter and not at Pluto. At Pluto,my first and only objective is to learn about Pluto. If I learn anything at allabout the spacecraft at Pluto...that would not be good."

NewHorizons will take on Jupiter operations for five months, from January to theend of June next year. But within that timeframe, there are 10 days of veryintense science investigations now being scheduled.

"Thisis a stress test. Just like the doctor gets your heart racing on a treadmill...weare really putting that spacecraft through its paces," Stern added.

NewHorizons is the 8th spacecraft to arrive at the Jupiter system.

"Weare going to do a lot of good science," Stern explained. For one, the probewill fly down Jupiter's magnetotail-- never before done event.

Dueto the Jupiter's strong magnetic field, the planet's magnetosphere fills a vastvolume of space. As New Horizons departs the Jovian system, the path to Plutohappens to take the spacecraft down the "tail" of Jupiter's magnetosphere thatis pulled back behind the planet.

Jupiterscience targets on the New Horizons to do list include looks at the planet'slittle and great red spots, ring structure, as well as Io and Europa--two moonsof Jupiter's entourage of over 60 moons found so far.

"Wehave a few goals at Europa," noted John Spencer, a staff scientist at SwRI'sDepartment of Space Studies and also the New Horizons deputy imaging nodeleader. "We'll have a somewhat improved look at the infrared spectrum of thedarker non-ice material on Europa's surface," he told SPACE.com.

Thatmaterial seems to be some sort of water-bearing salt or perhaps sulfuric acid -and may hold clues to the composition of Europa's subsurface ocean, Spencerpointed out.

Othergoals at Europa are to understand its ultra-thin oxygen atmosphere better,Spencer added. That will be done by New Horizons obtaining spectra of theultraviolet airglow emissions from that moon's atmosphere. Also, the spacecraftwill watch a star pass behind Europa and look for absorption of the starlightby Europa's atmosphere. A similar tactic is being applied in observing Io'smore substantial atmosphere.

"We'llalso be mapping some very peculiar huge circular grooves on Europa which canonly be seen when the Sun hits the surface at just the right angle," Spencersaid.

Staring at the rings

Spencersaid that the New Horizons science team and associates are looking to do thingsthat haven't been done before at Jupiter...or inspecting things that are changingwith time.

Asexample, infrared scans of ammonia clouds that appear and disappear in the wakeof Jupiter's great red spot are to be done. New Horizons totes a near-infraredinstrument with much higher spectral resolution than equipment carried on theearlier Galileo mission at Jupiter, he said.

"Sowe're focusing on something pretty cool that hasn't been done before," Spencersaid.

Inaddition, New Horizons will spend a lot of time staring at the rings, lookingfor very small satellites that may be embedded in the rings that haven't been discoveredbefore, Spencer observed. "There's some interesting structure in the rings thatmay be due to dust being shed off smaller bodies."

Jupiter's Io - a volcanically active moon studied intently by NASA's Galileo spacecraft as follow-up to earlier Voyager 1 Voyager 2 observations -- is due for scrutiny by New Horizons too.

"We'llspend a lot of time staring at the night side of Io...looking in the visible andnear-infrared," Spencer said. New Horizons data, he added, should help bracketthe high temperatures for volcanoes on Io.

Butto help clear up the mystery, Io will have to cooperate and cough up the goodson New Horizons time, Spencer said.

There'smuch to do in readying both spacecraft and the entire New Horizon team for theclose encounter of the Jovian kind. New Horizons will whisk by Jupiter atclosest approach on February 28, 2007, speeding through space at some 47,000miles per hour (about 21 kilometers per second).

"Rightnow, we wish we had more time. It's a little too fast," Spencer concluded.