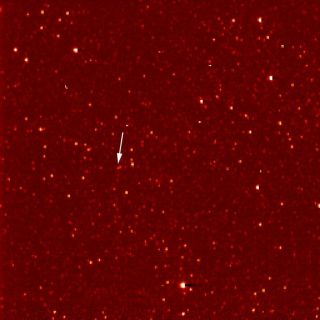 A NASA spacecrafthurtling away from Earth has caughtthe first glimpse of its distant destination: the dwarf planet Pluto.

The NewHorizons probe, set to swing by Pluto and its moonsin 2015, plucked the small planet from a star-filled image during a checkoutperiod using the spacecraft's long range camera [image].

"Finding Plutoin this dense star field really was like trying to find a needle in a haystack,"said NewHorizons principal investigator Alan Stern, of the Southwest ResearchInstitute in Boulder, Colorado, in a statement.

Stern saidastronomers took a page from the book of the late skywatcherClyde Tombaugh--who discovered Pluto in 1930--and switchedbetween different images of the same area, taken days apart, to hunt for the planet.

But where Tombaugh used photographic plates, New Horizons researchersrelied on digital images taken of Pluto's expected location by their probe'sLong Range Reconnaissance Imager (LORRI). The small planet was easilyidentified as it moved against the background of stars.

"Wewon't get useful science out of these first detections of Pluto," Sternsaid. "But during the next several years of approach, we'll use LORRI tostudy Pluto's brightness variation with our angle to the Sun to build a 'phasecurve' we could never get from Earth or Earth orbit."

Thatshould yield new details of Pluto's frigid surface well before New Horizonsmakes its flyby past the dwarf planet on July 14, 2015, he added.

Inthe meantime, New Horizons researchers are content to know that the probe'slong-distance camera is working well, and eagerly awaiting next year's Feb.28slingshot past Jupiter. Thespacecraft was built for NASA by Johns Hopkins Applied Physics Laboratory,which is also managing the mission's more than nine-year flight.

ThePluto portrait was taken between Sept. 21-24, storedaboard New Horizons and only recently relayed back home to Earth. New Horizonswas about 2.6 billion miles (4.2 billion kilometers) from its planetary targetat the time of the LORRI image.

"Thoseof us who calibrated LORRI on the ground and in flight are not surprised to seewhat it can do, but we are mighty grateful that LORRI has survived launch andits first several months in space without any loss of performance," said LORRIprincipal investigator Andy Cheng, of the Applied Physics Laboratory, in astatement.

NASAhas billed New Horizons' journey as the U.S. space agency's fastest mission todate despite its long travel time. Stern and his fellow mission scientists arehoping to send their spacecraft past Pluto to visit at least one other icyobject in the distant Kuiper Belt, which stretches beyond the orbit of Neptune. [Click herefor a graphic of the probe's flight path.]

New Horizonsis currently speeding through the solar system at about 20.8 kilometers persecond with respect to the Sun. That's about 46,528 miles per hour (74,880kilometers per hour).