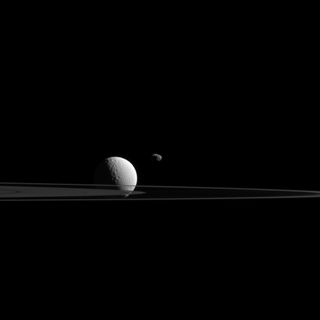 The photo, which was taken on Oct. 27 but just released Tuesday (Jan. 19), shows the spherical Tethys and the lumpy Janus, whose disparate shapes are a direct result of their divergent sizes.

"Moons like Tethys (660 miles or 1,062 kilometers across) are large enough that their own gravity is sufficient to overcome the material strength of the substances they are made of (mostly ice in the case of Tethys) and mold them into spherical shapes," NASA officials wrote in a description of the image.

"But small moons like Janus (111 miles or 179 kilometers across) are not massive enough for their gravity to form them into a sphere," they added. "Janus and its like are left as irregularly shaped bodies."

Tethys is the fifth-largest of Saturn's 62 moons. The biggest Saturn satellite, Titan, is nearly five times wider than Tethys, at 3,200 miles (5,150 km) in diameter. (Titan is about 50 percent wider than Earth's moon, and is the second-largest moon in the solar system, behind the Jovian satellite Ganymede.)

The $3.2 billion Cassini mission is a joint effort involving NASA, the European Space Agency and the Italian Space Agency. The Cassini spacecraft launched in 1997, arrived in the Saturn system in 2004, and delivered a lander called Huygens to Titan's surface in early 2005.

Cassini will continue studying Saturn and its moons until September 2017, when the probe will intentionally plunge into the ringed planet's atmosphere.