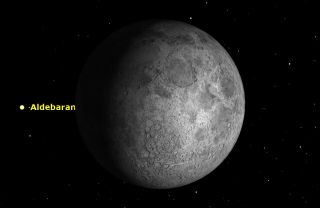 On Tuesday, Jan. 19 at 10 p.m. EST, the moon will eclipse the bright star Aldebaran as seen from most of North America. The exact time will vary depending on your location.
(Image: © Starry Night Software)

A stellar eclipse will be visible from almost all of the United States tonight (Jan. 19), when a bright waxing gibbous moon passes in front of the star that marks the angry orange eye of Taurus, the bull.

The eclipsed star is Aldebaran, the 13th brightest in the sky and certainly a colorful one. Astronomers call this type of eclipse an "occultation." As the moon orbits the Earth, it appears to move slowly toward the east relative to the stars, at roughly its own diameter per hour. A waxing moon always leads with its dark edge as it moves along its orbit against the starry background.

So, on this night, you'll be able to watch as the 82-percent-illuminated moon slowly creeps in toward Aldebaran, with the star disappearing along the unlit part of the moon. Because the moon lacks an atmosphere and stars are mere pinpoints of light, the disappearance appears instantaneous; Aldebaran will seem to "click off" as if someone hit a switch. The effect is quite dramatic. You can watch it with just your eyes, but binoculars or a telescope will certainly improve the view.[Skywatching 2016: The Year's Must-See Events (Infographic)]

Depending on where you live, Aldebaran will remain out of view, behind the moon, for up to 80 minutes, finally reappearing on the moon's bright side.

If you live in the Pacific time zone, it may be challenging to view this phenomenon. The disappearance will occur either in bright evening twilight or, if you're in the western half of California, just prior to local sunset. For other areas in the West, depending on where you're located, Aldebaran will click off sometime between 5:10 p.m. and 5:30 p.m.

The reappearance of the star happens on the bright side of the moon, and is far less obvious to sight if you're using just your bare eyes rather than binoculars or a telescope.

For the reappearance, those living in the southern part of a time zone will see the return of Aldebaran sooner than those in northern locations. So, in the East, for instance, those in Atlanta will see Aldebaran emerge into view at 10:07 p.m., whereas those in Portland, Maine, will have to wait until 10:50 p.m. to see the star come back into view. [January's Night Sky: Planets, Giant Stars and More (Video)]

In the accompanying table, I've provided a list of 17 U.S. and Canadian cities, along with the local standard times when Aldebaran will disappear behind the dark part of the moon ("immersion") and when it is due to pop out into view again on the moon's bright side ("emersion").

For the more technically inclined . . .

For more detailed timetables for many locations, as well as a Mercator map depicting the region of visibility, check this lunar occultations website.Countries are listed alphabetically by two-letter abbreviations, so "CA" = Canada; "US" = United States. There are 156 locations listed for Canada and 319 for the United States. For the times of disappearance and reappearance, Universal Time (UT) is used. To convert to Eastern Time, subtract 5 hours; to Central Time, 6 hours; Mountain Time, 7 hours and Pacific Time, 8 hours.

Universal Time is the same as Greenwich Mean Time and will reflect times that are after midnight and valid for the calendar date of Jan. 20. But when you correct for your time zone, it will be before midnight, and hence for Jan. 19.

For example, from Philadelphia (listing #911), Aldebaran's disappearance is given as 2:30:23 UT on Jan. 20. If we correct for the Eastern time zone by subtracting 5 hours, we get 9:30:23 p.m. EST. That's the moment when Aldebaran is predicted to disappear behind the moon's dark limb as seen from the City of Brotherly Love.

Missed it by that much!

Now, for some bad news: If you live anywhere south of a line that runs roughly from Eagle Pass, Texas, to Maurepas, Louisiana, to the Atlantic coast at Savannah, Georgia, you'll be outside the occultation zone. This region encompasses south Texas, the immediate Gulf Coast, practically all of Florida and a slice of southern Georgia.

If you live in these areas, you will see Aldebaran come tantalizingly close to the lower edge of the moon, but it will always remain in view. If you managed to position yourself precisely on the graze line — actually, it's a path 2 to 3 miles (3 to 5 kilometers) wide — you might see the star wink out and back, more than once as it skims behind a rugged lunar landscape composed of mountains and valleys along the southern lunar limb.

Editor's note: If you capture a great photo of the moon or any other night-sky sight and want to share it with us and our news partners for a story or gallery, we want to know. Send your images and comments to spacephotos@space.com.