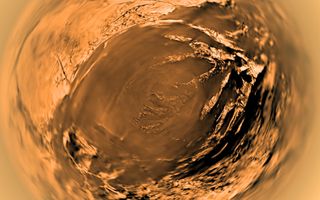 Not what it seems, this image represents the last moments of descent as ESA's Huygens probe landed on Saturn's moon Titan.
(Image: © ESA/NASA/JPL/University of Arizona)

This fish-eye view of Saturn's moon Titan, captured by ESA's Huygens probe as it descended onto the rock a decade ago, represents the first landing performed in the outer Solar System. The probe landed in Titan's mud letting scientists know liquid was present on the planet. Further data from the probe's counterpart Cassini revealed seasonal ebbs and flows of rain and dryness. [Learn more about Saturn's moons.]