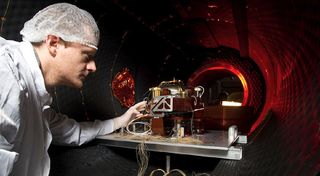 The SEIS instrument qualification model for the Mars InSight mission in testing at the CNES facility in Toulouse,
(Image: © CNES/E. Grimault)

PARIS — The French space agency, CNES, on Jan. 4 created an outside board of inquiry to examine the circumstances surrounding the discovery of multiple leaks in an instrument intended to launch on NASA's Mars InSight lander — leaks that appeared so late in the instrument's development that NASA and CNES were forced to scrap a planned March launch.

The next launch opportunity is in May 2018.

In a briefing at the agency's headquarters here, CNES President Jean-Yves Le Gall said it was only natural to want to have "a set of new eyes" investigate an anomaly of such serious consequence, which he said was "a real blow" to CNES.

CNES is prime contractor for the Seismic Experiment for Interior Structure (SEIS) instrument — three seismometers designed to analyze the Mars interior by detecting ground movement from small seismic events in the Mars interior.

One French official said the SEIS seismometers were so demanding that their development may have obscured the challenge of the titanium vacuum sphere, intended to operate in a temperature range beyond which that material is normally tested.

A first leak, appearing in November, was repaired in time for the March launch. Then another appeared, and then another. Up until Dec. 22 NASA and CNES had hoped to be able to deliver SEIS (already three months behind schedule) by Jan. 5 — just within the latest deadline to make the March launch.

A final leak, apparently from a different location, resulted in the decision to abandon the 2016 launch opportunity. Le Gall said the leak source was still not entirely clear. CNES officials have said it would take several months to get to the bottom of the problem.

He said NASA has asked CNES to continue as though a 2018 InSight launch is assured. But NASA officials said during a Dec. 22 conference call with journalists that the agency's budget rules leave some doubt as to whether sufficient funds can be foundto cover 26 months of storage of InSight — assuming that the United Launch Alliance Atlas 5 rocket being readied for the March launch can be repurposed to another customer.

NASA officials said the agency had spent some $525 million of the $675 million, including launch and operations, that had been budgeted for Mars InSight.

Le Gall said SEIS had been budgeted at CNES at around 50 million euros ($54 million). Assuming a rapid discovery of the leak's root cause and its resolution, Le Gall said the 26-month delay would add between 10 percent and 20 percent to the SEIS budget.

As is usually the case for science missions, CNES and NASA are operating on a no-exchange-of-funds basis, meaning CNES will incur the SEIS cost overruns on its own. Similarly, NASA will incur the cost of storing InSight and managing costs associated with the Atlas 5 rocket.

CNES had already positioned 2016 as its "Destination Mars" year. The agency's main briefing room was decked out in Mars terrain photos on the floor and wall. CNES is playing a role not only on InSight and other NASA Mars exploration missions but also on the Euro-Russian ExoMars 2016 and 2018 missions.

ExoMars and InSight had approached their launch dates with opposite profiles. InSight had secure funding and development as it approached final assembly. ExoMars faced funding challenges from the start and had already missed its January launch date because of a component glitch.

Now InSight will spend 26 months awaiting its next launch opportunity, while ExoMars 2016 has arrived at Russia's Baikonur Cosmodrome spaceport in Kazakhstan for final launch preparations.