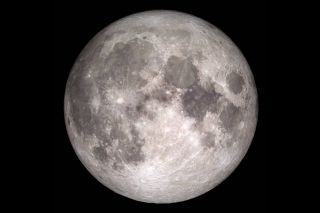 A full moon will light up the heavens on Christmas Day this year, for the first time in more than 30 years.
(Image: © NASA/Goddard/Lunar Reconnaissance Orbiter)

Think you can spot a jolly, red-clad old man as he speeds across the moon in a sleigh, spreading Christmas cheer? If so, the Slooh Community Observatory wants to hear from you.

On Christmas Eve (Dec. 24), Slooh is letting kids take control of its new StarShare camera, which will let the children snap a picture of the full moon — and maybe catch Santa Claus on his way to deliver presents to all the good children. In addition, Slooh is hosting a live webcast on Thursday (Dec. 24) between 7 p.m. EST (midnight GMT) and midnight EST (0500 GMT), featuring views of the full moon and Comet Catalina (which Slooh has dubbed the "Christmas Comet") from some of its many telescopes around the world.

You can go to Slooh.com to join and watch this broadcast live, and also see Slooh's library of past shows. You can also watch the broadcast here on Space.com, courtesy of Slooh.

Pictures of the moon will be particularly stunning this Christmas; the full moon is falling on Christmas Day (Dec. 25) for the first time since 1977. And there won't be another Christmas full moon until 2034.

"It's the perfect opportunity to keep an eye on the sky for old Saint Nick," Slooh representatives wrote in a press release. "We'll have live views of the full moon, and kids will be able to use the StarShare camera to snap and share their own sightings before hurrying off to bed."

Viewers can share their sightings on Slooh's Facebook page, or by tweeting to the @slooh account. Viewers will see the moon as broadcast from Slooh's camera in the Canary Islands.

Kids can also learn about the Christmas Comet, also known as Comet Catalina, which was discovered in 2013. Some astronomers believe the Star of Bethlehem, said to have guided three wise men to baby Jesus shortly after his birth, could have been a comet.

"Slooh will feature the Christmas Comet as it emerges from its recent close passage around the sun," Slooh added. "Slooh's live Christmas broadcast is also a celebration of [the observatory's] 12th anniversary, which delivered first light to the world on Christmas Day, 2003."

Editor's note: If you capture an amazing photo of the moon or Comet Catalina that you'd like to share with Space.com and our news partners for a story or gallery, send images and comments in to managing editor Tariq Malik at: spacephotos@space.com.