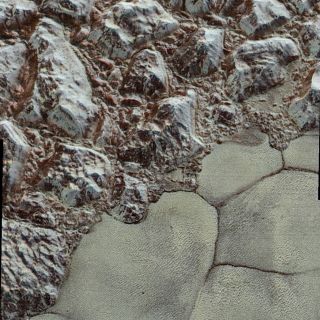 A new colorized image of Pluto, built from photos taken by the New Horizons spacecraft during its July flyby, depicts a strip 50 miles (80 kilometers) wide split between the dwarf planet's al-Idrisi mountains and the flat Sputnik Planum.
(Image: © NASA/JHUAPL/SwRI)

Astronauts head to the International Space station, while a damaged launchpad is refurbished; scientists ponder methane on Mars and the declining output of geysers on Saturn's moon Enceladus, and a physicist tries to determine if a "Star Wars"-esque lightsaber is something you could build in the real world. Here are the best space stories for the week of Dec. 14 to Dec. 18.

And away they go…

On Tuesday (Dec. 15), American astronaut Tim Kopra of NASA, British astronaut Tim Peake (of the European Space Agency) and Russian cosmonaut Yuri Malenchenko headed up, up, up to the International Space Station, to join the crew of Expedition 46. [Full Story: Liftoff! New Space Station Crew Launch Includes a First for the UK]

Can the weapon of choice for a "Star Wars" Jedi ever become reality? Dan Lincoln, a senior scientist at Fermi National Accelerator Laboratory, weighs in on the feasibility of such of a real-world lightsaber. [Full Story: Is a Real Lightsaber Possible? Science Offers a New Hope]

A space-funding company called Uwingu is selling naming rights to about 500,000 or so craters on Mars. Prices vary based on crater size and start at $5. And for the holiday season, the company is offering holiday-themed certificates of naming. [Full Story: Name a Mars Crater for Christmas]

Put your money where your space is

The Chinese central bank has printed a run of commemorative bills and coins that feature images of Chinese spacecraft. The 100-yuan bill and 10-yuan coin are intended to celebrate the country's 45-year history of space launches. While the bills and coins are legal-tender, they are not intended for circulation. [Full Story: China Celebrates Its Spaceflight History on New Banknote and Coin]

A relatively small star is releasing massive bursts of radiation, 10,000 times brighter than flares released by the sun. Scientists say this much radiation could seriously disrupt the formation of life on nearby planets. [Tiny Star Shoots Out Flares 10,000 Times Brighter Than the Sun's]

In a galaxy not so far away

Are the alien planets in "Star Wars" anything like real planets discovered by scientists? Is "hyperspace" a real thing? When can you get a speeder bike like Rey's from "The Force Awakens"? For answers to these questions and more, check out this article. [Full Story: 'Star Wars' Tech: 8 Sci-Fi Inventions and Their Real-Life Counterparts]

The New Horizons Probe continues to send back amazing images and information about the beloved ice dwarf Pluto. In the newest reveal, scientists have identified a deeply pitted region between the al-Idrisi mountains and the flat plane of Tombaugh Regio. [Full Story: Incredible New Photos Reveal Pluto's Pits and Other Terrain]

Winter "officially" begins in the Northern Hemisphere next week, with the arrival of the December solstice, or the moment when the sun is at its southern-most point in the sky. The solstice occurs at exactly 11:48 p.m. EST on Dec. 21 (which is 0448 GMT on Dec. 22). [Full Story: Ring in the New Season — December Solstice Happens Next Week]

Ready to launch and roll

The launch pad where an Orbital ATK Antares rocket exploded in October 2014 is almost completely refurbished and should be hosting launches soon. The pad is part of the Wallops Flight Facility on Wallops Island, Virginia. The repair has cost an estimated $15 million. [Full Story: Damaged Virginia Spaceport Launchpad Repaired for Private Rocket Launches]

The odor of life?

Two years ago, the Mars Curiosity rover detected methane, a possible indicator of life on the Red Planet. But the Martian methane mystery is far from solved, and scientists are looking for more clues to crack the case. [Full Story: Mystery on Mars: Does Methane Really Indicate Life?]