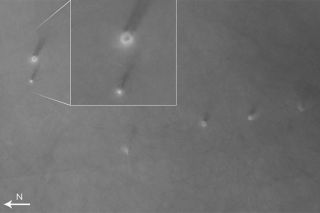 The HiRISE camera aboard NASA's Mars Science Laboratory imaged these dust devils active on a plain in Ganges Chasma (Valles Marineris) in July. Inset: Zoomed-in portion of the 2 dust devils that are believed to be interacting and rotating in opposite directions.
(Image: © NASA/JPL-Caltech/University of Arizona (Edit by Ian O'Neill/Discovery News))

By now most of us know that Mars is a windy planet (well, not as windy as “The Martian” would have us believe), where active aeolian processes shape the landscape continuously. Active dune fields are evidence of the large-scale transport of fine Mars sand whereas dust devils (like miniature tornadoes) show us the small scale and short-lived atmospheric processes that can sculpt dark tracks into the surface.

Fortunately for humanity, we have an armada of satellites in orbit around the Red Planet and these atmospheric phenomena can be recorded and tracked. Take, for example, this stunning observation by the High-Resolution Imaging Science Experiment (HiRISE) camera on board NASA’s Mars Reconnaissance Orbiter (MRO). In this view over a plain in Ganges Chasma (inside the famous Valles Marineris region), HiRISE was able to spy on not one dust devil, but a whole swarm of them.

The observation was made in July 2015 (and released last month) and it is hoped that some of the secrets behind dust devil formation and evolution may be revealed.

ANALYSIS: The Dust Devils of Mars Could Pack a Seismic Punch

Of particular interest, according to planetary scientist Paul Geissler, are two dust devils, of different sizes, in close proximity to one another (shown above). “These two have quite different morphologies,” he writes. “The bigger one is about 100 meters in diameter and is shaped like a doughnut with a hole in the middle. Its smaller companion is more compact and plume-like, but it too has a small hole in the center, where the air pressure is lowest. It may be that the smaller dust devil is younger than the larger one.”

Also in the observation are a row of four dust devils spaced approximately 900 meters (half a mile) apart in a row. In the full observation across the region, more dust devils can be seen whirling to the south.

Dust devils form on Mars in the same way they do on Earth. Heating of the surface creates a thin warm layer of air. If the conditions are right, this air starts to rise and rotate, creating a lower pressure region. Eventually, angular momentum builds and a funnel of rotating air can reach high into the atmosphere.

As noted by Geissler, dust devils are thought to migrate uphill or, if there’s a breeze, downwind — sounds pretty logical. But when dust devils are found in pairs, they are thought to spin in opposite directions. The best thing is that HiRISE images the Martian surface through different color filters and each snapshot in either infrared, red and blue occur at different times, instrument scientists can decipher which direction the dust devils are rotating. This analysis will be forthcoming.

But for now, the fact that we’re seeing active atmospheric processes on Mars is a wonder. On Earth, we take dust devils for granted, but on Mars, they play a key role in the characteristics and dust content of the atmosphere — a field of study of great interest to scientists. And HiRISE is playing a key role in our understanding of these whirlwinds on Mars.

Source: HiRISE/Univ. of Ariz., special thanks to Jason Major for tweeting about this awesome observation.