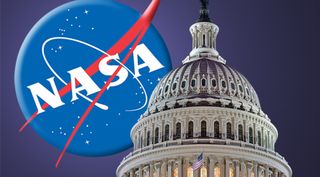 The omnibus spending bill released by Congressional appropriators Dec. 16 will give NASA an increase of $750 million over its original request for fiscal year 2016.

WASHINGTON — The final version of a fiscal year 2016 spending bill will provide NASA with nearly $19.3 billion, funding most agency programs at or above the administration’s original request.

The omnibus spending bill, released by House and Senate appropriators early Dec. 16 after extended negotiations, allocates $19.285 billion to NASA for fiscal year 2016. That total is $756 million above the administration’s requested budget and the total provided the agency in a House spending bill passed in August. It is nearly $1 billion above a Senate bill that appropriators approved in June but was never passed by the full Senate.

That increased spending, enabled by a budget bill passed in October that raised overall spending caps for discretionary programs, allowed appropriators to avoid long-standing debates about agency spending priorities by funding most programs at, or in some cases well above, the administration's request.

One big winner in the bill is the Space Launch System. The heavy-lift launch vehicle receives $2 billion in the omnibus spending bill, nearly 50 percent more than administration’s request of $1.36 billion and higher than levels in the House and Senate bills. [NASA's Giant Space Launch System in Pictures]

The report accompanying the spending bill requires that NASA spend not less than $85 million of the SLS funding on an "enhanced upper stage," a reference to the Exploration Upper Stage NASA has planned to use on the first crewed SLS mission and subsequent flights. Agency officials have previously raised questions about whether that new upper stage could be ready in time for that mission. However, the increased funding, and a prohibition on spending funding to human-rate the Interim Cryogenic Propulsion Stage that will be used on the first SLS mission, is intended to address that.

Another agency program winning a significant budget increase is NASA's planetary sciences program. The omnibus bill provides $1.631 billion for the program, $270 million above the administration’s request and $74 million above the House bill.

That total includes $175 million for a mission to Jupiter's moon Europa, which the bill's report states will include both an orbiter and a lander. NASA, which requested just $30 million for a Europa mission, is working on a concept called Europa Clipper that would go into orbit around Jupiter and make repeated flybys of Europa, but does not currently include a lander.

One of NASA's most hotly debated efforts, the commercial crew program, receives $1.2438 billion in the omnibus bill, the exact amount requested by the administration and several hundred million dollars above levels in the House and Senate bills. The final bill, like the earlier Senate bill, moves the program from the Exploration Systems budget account to the Space Operations one, which primarily funds the International Space Station.

The bill's report emphasizes that the full funding is intended to ensure that commercial crew systems currently under development by Boeing and SpaceX are ready to enter service in 2017, ending NASA's reliance on Russian Soyuz spacecraft to transport astronauts to and from the station. In August, NASA Administrator Charles Bolden notified Congress that he was extending a contract with Russia to cover Soyuz transportation services into 2018.

The report suggests NASA take money from payments earmarked for those future Soyuz flights to augment the funding provided by commercial crew. "The funds provided in this Act enable NASA to follow the fastest path to independence from Russia by providing for continuing development of a domestic crew launching capability," it states. "If necessary, NASA may derive resources for milestone payments from funds set aside for Russia by NASA for ISS crew launches scheduled to occur after U.S. providers will be operational in 2017."

The bill's report also sets aside exploration funding for a key element of NASA’s future deep space exploration plans, a habitat module. The report specifies NASA spend "not less than" $55 million on a "habitat augmentation module," with a goal of having the prototype of such a module completed by 2018. NASA is currently funding several small studies of such modules, and has discussed developing a habitat that could be flown in cislunar space in the 2020s for missions lasting up to a year.

The bill specifies that about 20 percent of the overall space technology budget, $133 million, be spent on a satellite servicing project called Restore-L. That program, based at NASA’s Goddard Space Flight Center, has been strongly supported by Sen. Barbara Mikulski (D-Md.), the ranking member of the Senate Appropriations Committee.

The House is expected to vote on the omnibus bill by Dec. 18, with the Senate to follow no earlier than Dec. 19. In the meantime, Congress is expected to pass another continuing resolution (CR) Dec. 16 to keep the government funded, likely until Dec. 22. The current CR, funding the federal government at 2015 levels, expires Dec. 16.

Amounts in millions of dollars.

* Commercial Crew funding was moved from Exploration Systems to Space Operations in the Senate and Omnibus bills.