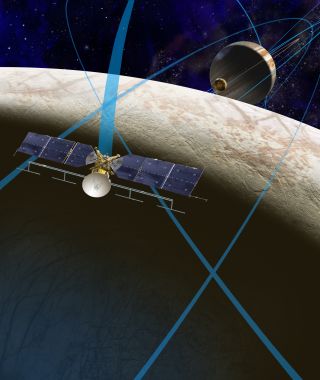 BOULDER, Colo. — "Think about it as pieces of a puzzle," Zoltan Sternovsky said.

Sternovsky, an assistant professor here at the University of Colorado Boulder, was referring to the question of whether or not Jupiter's moon Europa — which harbors an ocean of liquid water beneath its icy shell — can support life.

NASA plans to launch a robotic Europa flyby mission in the early 2020s to address this question, and Sternovsky is part of a team developing one of the spacecraft's nine instruments — the Surface Dust Mass Analyzer (SUDA), which will determine the composition of materials ejected from the surface of the frigid moon. [Europa May Harbor Simple Life Forms (Video)]

"Each instrument on the Europa mission is going to assess one piece of this puzzle," Sternovsky said here Nov. 4 at the university's Laboratory for Atmospheric and Space Physics, following a presentation by SUDA principal investigator Sascha Kempf, who's also based at UC Boulder.

"Some (instruments) look for the distribution of liquid-water pockets within the ice shell; some look at the turnover of surface material," Sternovsky added. "SUDA will assess the chemicals embedded in the ice. In particular, we want to see the chemicals in freshly surfaced materials."

After arriving in orbit around Jupiter, the as-yet-unnamed NASA probe will perform about 45 flybys of Europa over a period of three years. Flyby altitudes will range from 16 miles to 1,700 miles (25 to 2,700 kilometers), NASA officials have said.

SUDA will scrutinize the dust surrounding Europa during these flybys.

"Every moon without an atmosphere is wrapped in a dust exosphere populated by ejecta released from the surface due to the micrometeoroid bombardment," Kempf said.

The "SUDA instrument flies through this cloud of particulates," Sternovsky explained. "Those that enter SUDA will get analyzed, which is hundreds or thousands, depending on the altitude."

These particles will slam into a plate at SUDA's base at high speeds, heat up and vaporize. Some of the particles will then ionize — acquire a negative or positive electrical charge, by gaining or losing electrons.

SUDA's work should allow mission scientists to identify organics — the carbon-containing building blocks of life as we know it — and construct compositional maps of Europa's surface, instrument team members said."The really cool thing about nature is that what gets ionized is not the [ice] — which is about 99 percent of the mass — but rather the more interesting chemicals embedded in the ice," Sternovsky said. "This has to do with the ionization energy of the molecules. As it turns out, water molecules are much harder to ionize than the salts and organic molecules we expect to detect."

The Europa flyby spacecraftwill experience high levels of radiation in the Jupiter system, so SUDA's developers, and all the other instrument teams, will have to shield their instruments properly. This represents a major design challenge, Kempf said.

But if such challenges can be overcome, the Europa mission should return very interesting results, Sternovsky said.

"The whole mission and each instrument will contribute pieces to the big puzzle, which is understanding the evolution of life," he said. "Is Earth unique, or is life widespread and forms once conditions are right? Either way, knowing the answer would be very, very exciting. I believe this is perhaps one of the most important science questions of this century, if not … for all humankind."