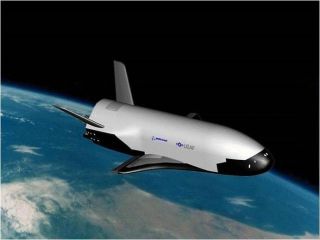 Mum's the word: The U.S. Air Force's secretive X-37B space plane has winged its way past the 200 day mark, carrying out a classified agenda for the American military.

The unmanned X-37B space plane rocketed into orbit on May 20 on a United Launch Alliance Atlas V rocket launching from Florida's Cape Canaveral Air Force Station back. The reusable robotic space plane mission, also dubbed OTV-4 (short for Orbital Test Vehicle-4), is the fourth spacecraft of its kind for the U.S. Air Force.

OTV-4 also marks the second flight of the second X-37B vehicle built for the Air Force by Boeing Space & Intelligence Systems. Only two reusable X-37B vehicles have been confirmed as constituting the fleet. [See photos from the X-37B space plane's OTV-4 mission]

The X-37B space plane  looks like a miniature version of NASA's now-retired space shuttle orbiter. The military space plane is 29 feet (8.8 meters) long and 9.5 feet (2.9 m) tall, and has a wingspan of nearly 15 feet (4.6 m). The spacecraft sports a payload bay about the size of a pickup truck bed.

While the overall duties of the space plane remain secretive, it was previously announced that this craft carries a NASA advanced materials experiment and an experimental propulsion system developed by the Air Force.

To date, all flights of the X-37B touched down at Vandenberg Air Force Base in California. When and where OTV-4 will return to Earth is not known.

In 2014, it was announced that Boeing Space & Intelligence Systems had consolidated its space plane operations by making use of NASA's Kennedy Space Center (KSC) in Florida as a landing site for the X-37B.

According to Boeing, a former KSC space-shuttle facility known as Orbiter Processing Facility (OPF-1) has being converted into a structure that will enable the Air Force "to efficiently land, recover, refurbish and relaunch the X-37B Orbital Test Vehicle (OTV)."

Leonard David has been reporting on the space industry for more than five decades. He is former director of research for the National Commission on Space and is co-author of Buzz Aldrin's 2013 book "Mission to Mars – My Vision for Space Exploration" published by National Geographic with a new updated paperback version released in May 2015. Follow us @Spacedotcom, Facebook or Google+. Published on Space.com.