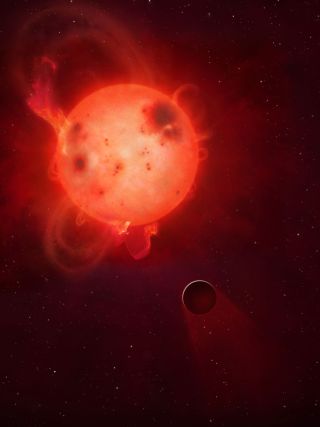 Artist's illustration of the exoplanet Kepler-438b's atmosphere being stripped away by radiation thrown off by its red-dwarf host star. ‬‬‬
(Image: © Mark A Garlick / University of Warwick)

One of the most Earth-like alien planets ever discovered may not be capable of supporting life, a new study reports.

Every few hundred days, the host star of Kepler-438b — an exoplanet just 12 percent wider than Earth that appears to be the right temperature to host life as we know it — blasts out "superflares" of high-energy radiation more powerful than any eruption ever recorded from our sun, the researchers said.

These flares by themselves likely do not have much of an impact on the planet's habitability, the researchers said. But if the flares are accompanied by gigantic explosions of plasma known as coronal mass ejections (CMEs), as strong flares from the sun generally are, life might have a hard time getting a foothold on Kepler-438b, they noted. [10 Exoplanets That Could Host Alien Life]

‪"Large coronal mass ejections have the potential to strip away any atmosphere that a close-in planet like Kepler-438b might have, rendering it uninhabitable," study co-author Chloe Pugh, of the University of Warwick in England, said in a statement. (Kepler-438b completes one orbit every 35 days but is still within the so-called "habitable zone," because its host star is a red dwarf considerably dimmer and cooler than the sun.)

"With little atmosphere, the planet would also be subject to harsh UV [ultraviolet] and X-ray radiation from the superflares, along with charged particle radiation, all of which are damaging to life," Pugh added.

Kepler-438b, which lies about 470 light-years from Earth, may be able to retain an atmosphere if it possesses a global magnetic field like Earth does, the researchers said.

"However, if it does not, or the flares are strong enough, it could have lost its atmosphere, be irradiated by extra-dangerous radiation and be a much harsher place for life to exist," lead author David Armstrong, also of the University of Warwick, said in the same statement.

As its name suggests, Kepler-438b was discovered by NASA's Kepler space telescope, which has found more than half of the 1,900 or so alien worlds known to date.

Kepler-438b has a 70 percent chance of being rocky, researchers have said. Indeed, it's the most Earth-like alien world known, according to the Earth Similarity Index (ESI), a metric that takes into account an exoplanet's size, density, surface temperature and other characteristics.