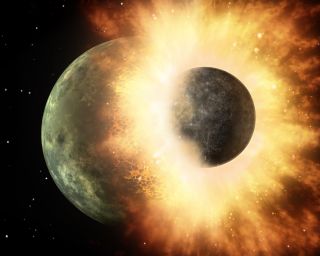 An artist's image of a collision between two planetary bodies. A similar crash likely formed the Earth and moon. New research suggests that the Earth took water and other volatiles from the moon after the collision.
(Image: © NASA/JPL-Caltech)

Earth may have stolen away water that would otherwise have gone to the moon.

New research suggests that after the impact that formed the Earth and its moon, our planet may have snatched up easily vaporized material known as volatiles, including water and other molecules. As the newly formed moon moved away, it may have spurned the remaining material available, casting it back toward Earth.

"The idea for decades has been that the vaporized volatiles escaped, and that's why the moon lacks them," Robin Canup, of the Southwest Research Institute in Colorado, said on Tuesday (Nov. 10) in a news briefing at the annual meeting of the Division for Planetary Sciences of the American Astronomical Society, in National Harbor, Maryland. Canup was the lead author of a research paper that proposed the material didn't vaporize, but instead hung around. [Water on the Moon: The Search in Photos]

"We're exploring an alternative," she said.

My water! All mine!

Early in the life of the solar system, a young, volatile-rich protoplanet floated near what is Earth's orbit today. A violent collision with another massive object, called Theia, is thought to have shattered that growing world, allowing the formation of the Earth and moon.

Rocks found on the moon bear a striking similarity to those on Earth, but with one difference: They are noticeably lacking in volatile material, such as water, zinc, sodium and potassium. For years, scientists proposed that the heat from the crash with Theia might have vaporized the volatiles, allowing them to completely escape the system. But Canup and her team argue that very little of that material would have been lost, because the speed necessary to leave Earth's gravity would be so high. If that material stuck around, it would have been available for both the Earth and the moon to gather up. [Evolution of the Moon: A Visual Timeline (Gallery)]

Since its formation, the moon has been steadily orbiting farther and farther from Earth; today, it moves away at a rate of 1.5 inches (4 centimeters) each year. As that process occurred in the first few decades of the moon's lifetime, the satellite quickly lost the ability to accrete water and other lighter materials from Earth's ring. Instead, as the dust and gas of the ring interacted with the gravity of the satellite, those materials were flung back toward the planet rather than falling onto the moon.

The moon would take the last half of its mass from the inner region of Earth's disk, which would have been too hot to contain water and other volatile material, Canup said. The result would be a rocky crust on the moon ranging from 60 to 300 miles (100 to 500 kilometers) thick. The layers under that crust could contain more of the missing materials.

The team reached its new results, which were published online in the journal Nature Geoscience, by combining models of heat and chemistry with the previously utilized models of motion, the first time this had been done. The chemistry models were developed especially for this work, and were built to simulate the oxygen-dominated disk that would surround the new Earth, rather than the hydrogen-dominated disk surrounding the sun.