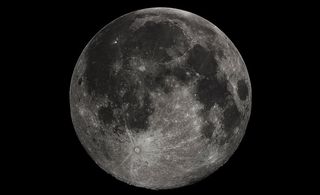 Deep beneath the surface of the moon lies a nucleus of iron that scientists on Earth are studying with the power of X-rays.
(Image: © Space.com/NASA)

Deep beneath the surface of the moon lies an iron heart that scientists are probing in a new study: By using X-rays to scan the kind of iron probably found in the moon's core, scientists may gain better estimates of the core's size and composition.

Studying this unique kind of iron, and subjecting to incredible temperatures and pressures similar to those in the heart of a moon or planet, these findings could also help model the interior of small rocky planets such as Mars and Mercury, researchers added.

Rocky planets and moons generally have metallic cores made up mostly of iron. A better understanding of the properties of iron at the high pressures and temperatures often found in the cores of these rocky bodies could yield vital insights about the solar system. For example, precise knowledge of the structure and composition of the moon's core is essential for understanding its origin and evolution, which, in turn, would shed light on the birth and development of Earth. [10 Surprising Moon Facts]

The moon is the only rocky body other than Earth that scientists have multiple direct seismic data from, details gathered by astronauts during the Apollo missions. Based on this seismic data, previous studies estimated the moon had a solid inner core of pure iron and a liquid outer core made of an iron-sulfur alloy, but much about the structure of the lunar core remains controversial.

Until now, most studies of how iron behaves in the cores of rocky bodies have focused on the structure that is probably most stable in the pressures and temperatures found in Earth's inner core. This so-called hexagonal close- packed, or "epsilon," phase arranges iron atoms in a lattice whose bottom and top faces are hexagons and whose side faces are rectangles.

However, at the moderate pressures characteristic of the cores of smaller rocky bodies such as the moon, Mercury or Mars, iron usually takes on a different structure. This so-called face-centered cubic, or "gamma," phase involves iron atoms placed at the corners of lattices shaped like cubes, with atoms also present in the middle of the face of each cube. Much remains unknown about how this form of iron might behave at high pressures and temperatures.

Now, scientists have conducted experiments to measure the velocity of seismic waves traveling within the gamma phase of iron that is likely found in the moon's core. In these experiments, the iron is subject to extreme temperatures and pressures. These findings could help develop more accurate models of the interiors of small rocky planets and moons.

The researchers used X-rays to see how sound waves behaved in gamma iron at temperatures of up to about 1,610 degrees Fahrenheit (875 degrees Celsius) and pressures up to 19 gigapascals. (In comparison, 1 gigapascal is more than nine times greater than the pressure at the bottom of the Mariana Trench, the deepest part of the ocean.)

After re-examining seismic data from the Apollo missions in light of these new findings, the researchers suggest the moon's solid inner core has a diameter of about 310 miles (500 kilometers) and a liquid outer core about 50 miles (80 km) thick. They suggest the inner core is pure gamma iron, while the outer core is composed of iron alloys made up of 3 to 6 percent sulfur by weight.

The same approach the scientists employed to understand the properties of the moon's core "can be extended to other planets, such as, for instance, Mars," lead study author Daniele Antonangeli, a physicist at the University of Pierre and Marie Curie in Paris, told Space.com.

For example, NASA plans to send the InSight robotic lander to Mars in 2016. The main scientific objective of the mission is to place a seismic station on the Red Planet. The new findings that Antonangeli and his colleagues have gathered "will be essential to the interpretation of such seismic observations," he said.

The scientists detailed their findings online today (March 16) in the journal Proceedings of the National Academy of Sciences.