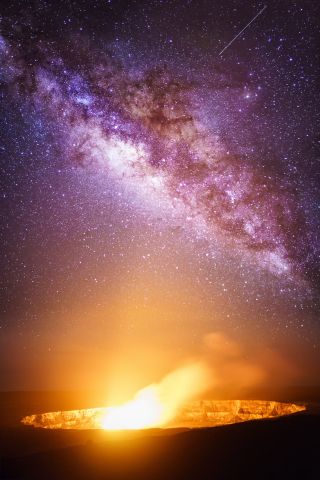 The Milky Way galaxy shines brightly above a lava lake in Halemaumau Crater in this skywatching image.

Astrophotographer Rico Granger took this image in July, 2014 from Hawaii Volcanoes National Park on the island of Hawaii. The image is a single, 15-second exposure taken using a Sony a7 camera with a Rokinon 24mm lens (f/1.4). The image was processed in Lightroom.

"Once the sun had set, the Milky Way slowly emerged. And to top that off, there were meteors galore streaking across the sky," Granger wrote in an email to Space.com.

There are three meteors in the image. Earth's host galaxy, the Milky Way, is a barred spiral galaxy seen as a band of light in the night sky. It stretches between 100,000 and 120,000 light years in diameter. It is estimated that the galaxy has approximately 400 billion stars. At the center of our galaxy lies a gigantic black hole billions of times the mass of the sun.

Taking the image was an unforgettable experience for Granger.

"Probably one of the greatest nights of my life in one of my favorite places," he added.