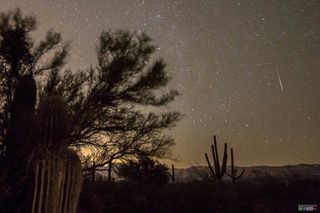 Even before the start of 2015, assiduous meteor observers were aware that this was going to be an excellent year for some of the best of the annual meteor displays.

The August Perseids nearly coincided with a new moon, and the upcoming December Geminids will peak when the moon is just a narrow crescent in the early evening skies.

Now, one of the more reliable meteor showers — sort of a junior version of the Perseids — is set to reach its maximum before sunrise on Thursday morning (Oct. 22). This upcoming display is known as the Orionids, because the meteors seem to fan out from a region to the north of the constellation Orion's second-brightest star, ruddy Betelgeuse. [Meteor Shower Quiz: How Well Do You Know 'Shooting Stars'?]

Currently, Orion appears to be ahead of Earth as the planet journeys around the sun, and the constellation has not completely risen above the eastern horizon until after 11:00 p.m. local daylight time. So expect to see few, if any, Orionid meteors before midnight — especially this year, with a bright waxing gibbous moon glaring high in the western sky.

But moonset is around 1:30 a.m. local daylight time on Thursday, and that's a good time to begin preparing for your meteor vigil. The shower will peak several hours later, at around 5 a.m., when Orion will be highest in the sky toward the south. Around that time, under clear, dark skies, skywatchers could see 20 to 25 "shooting stars" per hour.

Typically, Orionid meteors are normally dim and can't be seen very well from urban locations, so you should try to find a safe rural location to see the best Orionid activity. Lie down on a long lawn chair or inside a sleeping bag and look overhead toward the southern part of the night sky.

"I managed to get 22 total meteors with nine Orionids between 4:30 and 5:30 a.m. EDT," Jones wrote on the Meteorobs Internet mailing list. "That's more than I was expecting, to be sure. Far too soon to say how that portends for the actual maximum."

He added: "The dark, clear, sharp skies this morning helped me out a lot! The faint but beautiful winter Milky Way stood out sharp as a tack as it crossed the meridian!"

In studying the orbits of many meteor swarms, astronomers have found that they correspond closely to the orbits of known comets. Indeed, meteor showers are caused when material shed by these icy wanderers over the eons slams into Earth's atmosphere.

The Orionids are thought to trace back to Halley's Comet. Halley has circled the sun many hundreds, if not thousands, of times, and its trail of debris has been distributed more or less uniformly all along its entire orbit.

Earth plows into this trail twice per year. One of these encounters occurs in early May and causes a meteor display that emanates from the constellation Aquarius, the Water Carrier. This shower is therefore known as the Eta Aquarids. The other encounter happens in late October and produces the Orionids.

Both the Orionids and the Eta Aquarids feature pieces of comet debris that start burning up very high in Earth's atmosphere, possibly because they are composed of lightweight material.

This means the material likely comes from Halley's diffuse surface and not its core. Recent studies have shown that about half of all Orionids that are seen leave trails that last longer than other meteors of equivalent brightness. This is undoubtedly connected in some way to the makeup of Halley's Comet.

"They (the Orionids) are easily identified ... from their speed," wrote David Levy and Stephen Edberg in "Observe: Meteors," an Astronomical League manual. "At 66 kilometers (41 miles) per second, they appear as fast streaks, faster by a hair than their sisters, the Eta Aquarids of May. And like the Eta Aquarids, the brightest of the family tend to leave long-lasting trains."

Comets are icy relics from the solar system's early days, the odd bits and pieces that went unused when the sun and its attendant planets came into their present form. So it is that the shooting stars called the Orionids are an encounter with the traces of a famous visitor from the depths of space and from the dawn of creation.

Editor's note: If you capture a stunning image of an Orionid meteor and would like to share it with Space.com and its news partners for a potential story or image gallery, send photos and comments in to managing editor Tariq Malik at spacephotos@space.com.