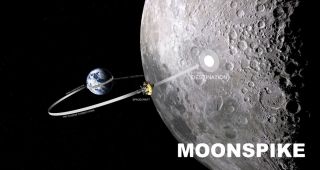 A team of rocketeers launched an out-of-this-world Kickstarter campaign today (Oct. 1) to raise $1 million for "Moonspike" – an ambitious project to launch the first crowdfunded rocket to the moon.

The Moonspike project aims to launch a small titanium payload carrying photos and videos from project backers into space, and ultimately crash it into the moon. The resulting dust plume from the impact should observable from orbit, its backers say. While a science return from the mission would be desirable, the main goal is to see if a small group of engineers can create a moon rocket and payload for a reasonable amount of money, Chris Larmour, a co-founder of the project and serial space entrepreneur, told Space.com in an e-mail. It's the first campaign of its kind, with the Kickstarter page going live at 7 a.m. ET (1100 GMT) today.

"We've been working hard to develop our rocket and spacecraft designs over the past few months and today we are opening up our feasibility study document to the public," Larmour said. The other co-founder is Kristian von Bengtson, also a co-founder of Danish private space travel group Cophenhagen Suborbitals. [Related: How Crowdfunding Helps Spur Space Projects]

While the rocket has yet to be built, and the launch site and date determined, the design is as flexible as possible for different latitudes of launch site, Larmour said. It calls for a 22-ton, two-stage, liquid-fueled launch vehicle that can get a spacecraft (a third stage) of about 331 lbs. (150 kilograms) to Earth orbit to send to the moon, Larmour said. Most of the work will be done in-house by a small team to contain costs, he added.

"If we get backing we will move to a more detailed design as the next phase, and start building components fairly quickly," he said, but did not specify a date.

As Moonspike is a young company, the founders chose Kickstarter because they felt that traditional angel investors (individual backers with deep pockets) or venture capitalists (companies that invest in startups) would not be interested in taking on the risk, Larmour said.

The crowdfunding campaign will be "all or nothing," he acknowledged, with no Plan B if they don't raise the desired million. But if it does end up working out, the group plans to raise several tens of millions of dollars more through more traditional equity financing routes. The initial Kickstarter money will be used for hardware development and other setup to make investors more interested in the product, he added.

A team of seven people are working directly on the project, with four other "experienced business people" on the board of directors, Larmour said.

"The team we have gathered have both professional training with organizations like NASA and hands-on experience building rockets at Copenhagen Suborbitals, a private team of amateur rocket builders who designed and built several successful rockets on a shoestring budget during the past 7 years. The vehicles this team have designed and launched include the 9.3m tall [30.5 feet], liquid-fueled HEAT-1X, and the actively guided 5.3m Sapphire rocket," he wrote.

As regulations are believed to be one of the key risks to mitigate, the group has already started discussions with the UK Space Agency to learn the ropes.

The Moonspike Kickstarter campaign will run for 30 days. One of the perks offered to backers will be putting their personal images, videos or data on a "memory vault" inside the Moonspike payload. Outside of Kickstarter, a major sponsor will have the option of pressing the launch button.